Marseille (about to be) revisited

First of all, our beloved Philippe Meyer has obviously not dignified our contributions in our previous post by addressing them, although he seems to have read it. But who knows, it might come later so stay tuned…Men are strange creatures, he may not have been pleased with the correction of the sentence or the reference to the lyrics of Home Alone since he’s an expert usually…it really doesn’t matter, we still love the programme which makes our days start in such a subtly clever manner!

On a totally different topic, now, let me take you to the South…then we’ll go to the South-East…Asia but this is in exactly a month so we have a bit of time.

Have you ever heard about La Côte Bleue? I knew about Côte d’Azur…but am discovering the existence of La Côte Bleu

where I will be heading in two days. It’s time maybe to give a recap on the first quarter of my sabbatical and what I’m trying to achieve: meeting as many of you as possible, traveling to as many countries as I can and hoping to find new opportunities to wonder at our Cosmopolitan era, rather than lamenting on the vociferations of all those who try to deny its existence and beauty. So after the beauties of the French Atlantic Coast with Ladino singers in Houat and La Rochelle’s special Quebec ties noticeable even in the street pavements made of Plombs du Canada, after Cosmopolitan and Free Berlin 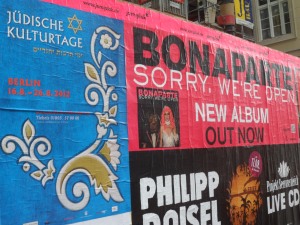 , after the Multicultural and Bilingual if not multilingual LA

,  after the beauties of Canaletto and the other Renaissance painters who contributed to Britain’s artistic wealth. That’s another kind of métissage a beautiful word containing the notion of weaving! It’s time for me to make a sort of retreat, not religious, God Forbid but certainly physical and spiritual nevertheless…

Similarly to my Atlantic trip, I’m now heading to a region I’m not at all familiar with, La Côte Bleu, near Marseille. I do hope this will enable me to visit one of France’s most cosmopolitan and fascinating cities and the very first my grand-parents and parents discovered as they crossed the Mediterranean from Tunisia to their new life, some 50 years age…I knew about their hard times, of course, and have seen amazing films my dad took of my grand-mother Ninette Masliah about to embark on the boat to Marseille…on the deck! What I never realized till now is that not only did they have to leave what had been their homeland for 2000 years, but that they did that together with the real pieds-noirs, who were far from welcome 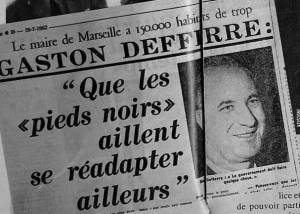 back to France as goes the famous Deferre’s headline: let them get readapted elsewhere. Funny how they should have been associated with the very people who definitely despised them the most back home!

I find it peculiar that precisely now, half a century after this exodus of the Pieds Noirs, by a strange coincidence, I should head towards this direction too!

I believe the experience will be rather special and without dwelling on the peculiar turn this trip should take in terms of personal experience. I’m also taking with me a new book, Le Code D’Esther,

the motto of which seems to be that there is no coincidence…On this as well, of course, I’ll keep you posted! Of course my interest in the book lies in its title initially as I happen to be quite fascinated by the Book of Esther, in which lies what I consider the initial reference to a linguistic policy : “8:9 Then were the king’s scribes called at that time in the third month, that is, the month Sivan, on the three and twentieth day thereof; and it was written according to all that Mordecai commanded unto the Jews, and to the lieutenants, and the deputies and rulers of the provinces which are from India unto Ethiopia, an hundred twenty and seven provinces, unto every province according to the writing thereof, and unto every people after their language, and to the Jews according to their writing, and according to their language.” (Bible ‘Chapter 8, art. 9’, The Book of Esther). It may also be related to the fact that, with the story of Ruth the Convert, it’s one of the very few stories which has a woman as a positive heroin…not a beguiling Delila! In any case, they had the idea to make the book extremely interactive thanks to a related application, a location of the various readers who are turned into researchers and above all the use of QR codes enabling us to watch online videos by pointing our iPhone towards them. So…till my next post, here’s a glance at what I should be trekking upon pretty soon….with a special thanks to the website Calanques13.com where I borrowed these superb photos and which I invite you to check for more of them!