It seems, my friends, that the divide between Israel and the Diapora is getting deeper with every move made by Israeli PM Bibi N…..

I was just enjoying the beauty and serenity of the charming city of Luang Prabang, Laos…

…When I heard about the news of Israel’s reaction to the decision of the UN Member States to accept the membership of Palestine as an observer, I felt hurt and outraged. I never ever want the Israeli prime minister to speak in my name. I’ll fend for myself and for my human rights if ever antisemitism prevails again as some signs seem to indicate in other parts of the world.

And how could they not prevail? I remember how angry we were, it’s one of my first memories as a little girl, when Général de Gaulle spoke of us, jews, as

Well you can watch this appalling speech but…some 45 years later, how could I answer those reminding me of this quotation by giving the example of Netanyahu’s government decision to not only go ahead with colonization, but to make sure to partition further the future state of Palestine with the new settlement.

So Israel, which owes its existence to this UN, now despises its Member States who decided to vote in favour of this Observer Member statute (the UN could only take act of this approval of a motion).

By its retaliation, Israel is now proving the world how much it cares for our point of view. Us, human rights concerned people, us a growing number of Diaspora Jews throughout the world, including in the USA. Worse, for me, Israel is simply not fair play! I know you’ve been telling me this for a while and that for a long time I’ve defended some positions I felt uncomfortable with, in the name of Israel’s security, in the name of the horrible actions perpetrated by Palestinian terrorists.

I of course agree that no state in the world would have stood under the rockets that plague the neighbouring cities of Gaza, but Schlomo Avnieri has remarkably summed it up in his brilliant paper in Haaretz (Dec.4th, 2012):

Following is the speech that the prime minister of Israel should have delivered at the UN General Assembly after Palestinian Authority President Mahmoud Abbas’ address:

“We are looking toward the future, but we cannot ignore history. How much pain and suffering would have been avoided, for both peoples, had the Palestinian movement accepted the United Nations’ partition plan on November 29, 1947, rather than 65 years later. Instead, the Palestinian national movement and the Arab League waged war not only against Israel, but also against the UN decision.

“Had the Palestinian movement accepted the idea of two states for two peoples back then, as we did, the war of 1948, which you call the Nakba, would not have taken place. The refugee problem would not have been created, tens of thousands of soldiers and civilians on both sides would not have been killed, the Arab countries would not have gotten entangled in war, and on May 15, 1948, two states would have been established on the territory of the British Mandate: Israel and Palestine, one alongside the other.

“Moreover, had the PLO leadership heeded the call of Egyptian President Anwar Sadat and joined him in his historic visit to Jerusalem in 1977, it would have been possible, in the atmosphere of reconciliation that prevailed, to begin to resolve the conflict between our two national movements.

“But we are looking toward the future. I know that there are many points of disagreement between us, and because of these we have failed to reach an agreement until now. But with an honest desire for peace and with the international recognition you have now received, these disagreements can be resolved by negotiations between us. I therefore call on you, sir, the president of the Palestinian Authority, and your entourage, to join me on my plane and return to the Middle East together. Over the long flight, we will be able to clarify between us a few of the principles ahead of the negotiations. At Ben-Gurion International Airport you will be welcomed like royalty, just like Sadat – the first person who had the courage to accept the historical reality of the existence of a Jewish state in the Middle East. Israel responded accordingly, and with a far-reaching willingness to compromise.

“I propose that we travel together from the airport to the Knesset. In the name of the Knesset and in the name of all the people of Israel, I invite you to bring a message of peace and reconciliation to your nation and mine. It is clear to me that, just as the Israeli public saw Sadat as a messenger of peace and reconciliation, that is how they will see you. Because it is the people of Israel – not the countries of the world – whom you must convince that you have chosen a path of reconciliation and compromise after so many years of animosity and refusal.

“I have no illusions that the path will be easy. The problems we face are complex, and they are not limited to territorial issues. But from the moment it becomes clear both to us and to you that each side accepts the legitimacy of the other, there will be an opening for reconciliation, even if it is difficult and complicated to get there.

“You have already come a long way, Mr. President. In the name of the people of Israel, in all their diversity, I would like to congratulate you. Let us say clearly and unequivocally that there is room for two states in our region: the Jewish nation-state and the Palestinian nation-state. The key is in our hands – in your hand, Mr. President.”

This speech, of course, was not delivered. Because that would require courage, wisdom and a Zionism that combines vision with realism – the Zionism of David Ben-Gurion, who led the way to Israel’s independence by accepting the partition plan, and of Menachem Begin, who welcomed Sadat to Jerusalem even as he gave up all of Sinai. How painful it is to realize that these qualities, which guarantee these two leaders a place in history, are so lacking in the prime minister of Israel today.

My Israeli friends, whom I’ll meet in Chiang Mai in a couple of hours as you are a growing number to settle here because you are fed up with your governement, let me simply share with you my sorrow, shame and anger. This is not a Jewish attitude, it’s an arrogant and short sighted attitude!

I’ve just come back from Luang Prabang and saw these amazing statues of Buddha in the mudra of refusing conflict. Let me offer this to all those who share my view, hoping to make it a good omen for a brighter future. 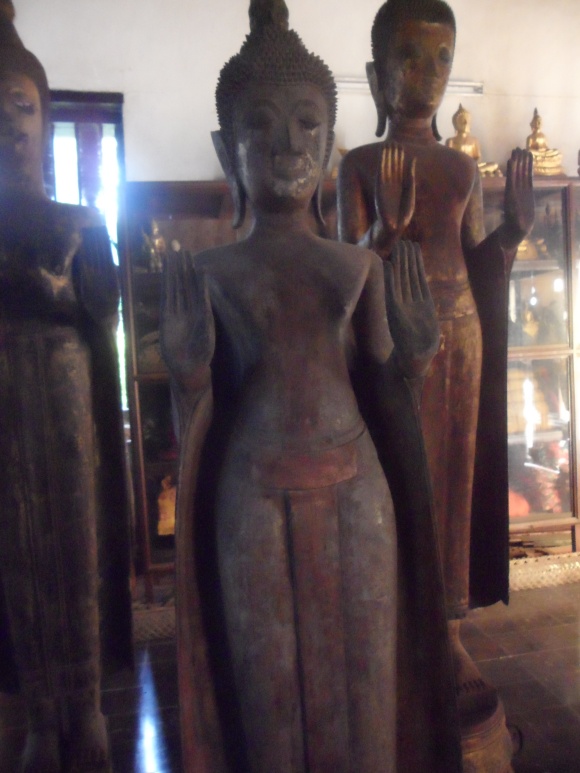 to show the world and Netanyahu that we disapprove the present predicament he’s conducted Israel to adopt.

Why building in E1 is so controversial

On Friday, the Israeli government announced that in response to the upgrade of Palestine to an observer state at the United Nations, it would build 3000 new housing units in the West Bank, including advancing plans in an area known as E1. The announcement has been met with huge criticism from the international community. A number of European countries have formallysummoned ambassadors to explain the government’s decision, and there are rumours that the United Kingdom may recall its ambassador to Israel, Matthew Gould, in protest.

E1 is an area of land next Ma’ale Adumim, east of Jerusalem. Until now no construction plans for residential units have been formally approved largely as a result of on-going pressure from the international community. 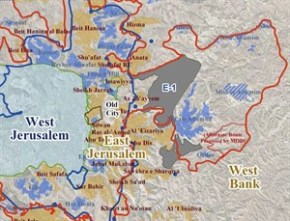 The reason there is so much concern about E1 is because if it were to be built, it would cut off the northern and southern West Bank from each other, and East Jerusalem from the West Bank, making the possibility of creating a contiguous Palestinian state impossible (click here for further information). Building in E1 is therefore seen as a nail in the coffin of a two-state solution. If the plans for E1 were to go ahead, it would mean nearly 4000 new housing units with around 20,000 new residents.

The international community is likely to continue to put pressure on Israel to hold-off from advancing plans for construction in E1 until it receives assurances and guarantees that it has no intention of building here.

Advancing plans in E1 should be of concern to all those that believe that the creation of a Palestinian state alongside a safe and secure Israel is the only long-term solution to the conflict.

And J Street’s release with an explicit title: E1 Development Would Be ‘The Death Knell for the Two-State Solution’ :

J Street strongly opposes the Israeli government’s announcement of its intention to build 3,000 new housing units on the West Bank and in East Jerusalem.

Of particular concern is the announcement of expedited planning for the development of the area known as E-1 between East Jerusalem and Maale Adumim. E-1 is the last undeveloped connection between the north and south of the West Bank. That land is so vital to the creation of a viable and contiguous Palestinian state that experts have called its possible development “the death knell for the two state-solution.”

Recognizing its importance, successive American administrations since the 1990s have intervened to prevent Israel from advancing plans for its development. We strongly urge the Israeli government to abandon these plans, and the Obama administration to maintain its firm opposition.

Please come back, we should have a JCall Europe release shortly, so you see…various groups, organizations, all in favour of a two States solution and all deeply sorry for the new turn of an Israel we have difficulty understanding….

Let me finish with colours of hope from Asia, let the colours mix and bring beauty to the world!