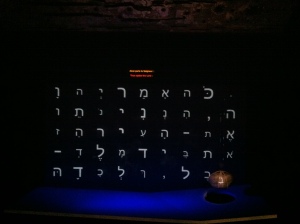 The initial appearance of the words of God which then vanish into fumes reminding of other fumes. Then the breaking of the Tablets of the Law…what a start! Everything is suggested, it’s now up to us to interpret it! 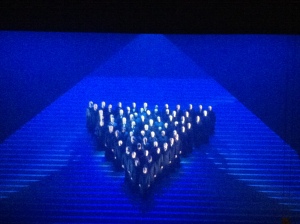 English Translation
Go, thoughts, on golden wings;
Go, settle upon the slopes and hills,
where warm and soft and fragrant are
the breezes of our sweet native land!
Greet the banks of the Jordan,
the towers of Zion …
Oh my country so beautiful and lost!
Or so dear yet unhappy!
Or harp of the prophetic seers,
why do you hang silent from the willows?
Rekindle the memories within our hearts,
tell us about the time that have gone by
Or similar to the fate of Solomon,
give a sound of lament;
or let the Lord inspire a concert
That may give to endure our suffering.
(http://classicalmusic.about.com/od/classicalmusictips/qt/Va-Pensiero-Lyrics-And-Text-Translation.htm)

I’ve always been transported, like almost anyone listening to it, by this complaint of the Jewish people fighting against Nabucco’s persecution. Watching it last night in the absolutely best performance I’ve ever seen so far (it’s the third or fourth time I watch this opera) prompted me several cosmo related comments I’d like to share with you.

First of all, it’s always been a wonder to me that Verdi chose the people of Israel and the quest for Zion as the setting for this patriotic anthem. I was also quite surprised at the inner knowledge a Catholic composer of 19th century Italy could have of the text of Jeremiah this story is based upon (my knowledge on this is rather recent….I knew mostly the story from my beloved Nos Heros (Our Heroes) book I read avidly as a kid.

The story is so complicated that I usually forget it from one performance to the next, although I believe this time Roland Aeschlimann made sure it would become my reference.

For those who need to be filled in, let me simply quote the Grand Théâtre‘s Programme: “Nabucco, King of Babylon, has conquered the Israelites and destroyed their temple. Zaccaria the High Priest entreats his people not to lose faith in Jewhova. He has a valuable hostage in the person of Fenena, Nabucco’s daughter, who is in love with Ismaele, nephew of Zdedekiah, the last king of Israel. Ismaele rejects the advances of Abigail, whom everyone considers Nabucco’s second daughter, while in fact the child of slaves. During his absencel, Nabucco has made Fenea regent of his kingdom. Abigail announces the death of her father the king and claims the crown. 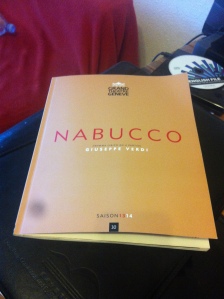 Nabucco returns unexpectedly to Babylon, and to everyone’s astonishment, proclaims himself king and god. Struck by divine wrath, he loses his crown and his reason. Abigail condemns Feneca and the people of Israel to death. On the banks of the Euphrates, the enlaved Israelite reflect on their miserable fate and long for their native land. Zaccaria stirs their courage. Nabucco recovers his wits and sets off to save his daughter and the Israelites. The idol of the god Baal shatters in pieces. All join in a hymn of praise to Jjehova while Abigail begs for forgiveness and takes poison.

Let me add that in this version, and I think for the first time on stage for me, Fenena commits suicide by stabbing herself to death right at the very end…but maybe I just never noticed before…

Baal, the idol, is the hebrew word for Lord or Master, so right from the beginning, both the opera and the story have intrigued me…and I’ve always wondered why the nasty people (Nabucco and Abigaille, which I always spell differently, sorry) are the ones we almost favour. They have a much more complicated personality, more songs to sing than the heros Fenena and Ismael (strange name for a Jewish prince when you know about Isaac and Ismaele). So a lot to wonder, like VERDI the republican whose initials were used to support Victor-Emmanuele Rei di Italia (King of Italy)… 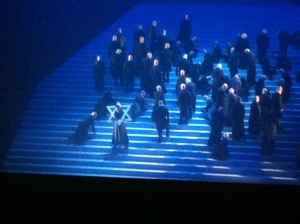 I also always preferred the nasty and illegitimate daughter Abigail to her sweet and legitimate sister Fenena although the character of the former is quite despicable. Why would Verdi give the nasty one such a grandeur and literally make her the true heroine of this opera?

Among the various causes of wonder, the idealization of the Jewish People, in the view of today’s image of Israel is quite interesting. It gives a proof that we could read Jewish History the way it has been largely publicised, but we could also see how today the persecuted people has become the powerful State of a Greater Israel some authors of the 19th and early 20th century would certainly have disapproved.  I’m also thinking (aloud) of Isaac Babel whose work has recently been broadcast and reminded me of the Jewish identity I so scarcely search for in today’s Israeli mentality. Of course, my apologies to my many Israeli friends who share exactly my views as I was able to see during my recent visit to Israel (click on the link). They are however a minority in their country so it seems…

Italy today is a great nation but not all contradictions have been solved, so why should it be different for Israel which has achieved a truly amazing nation, no matter what I personally feel and fear…

But this is maybe….certainly, another story! When you start thinking…you end up at curious elucubrations…What remains is that at the 19th century, Italians could idealize the Jewish quest for their “patria si bella e perduta” whose “membranza si cara e fata” and “oggi nostra sara” to the point of making it a symbol for their own quest for unity.

Nabucco is an opera that speaks to each and everyone of us, no matter if we belong to a majority or a minority, because it can be read or rather listened to at so many various symbolic levels. This was so true last night that the Geneva audience, usually rather quiet during the whole opera, kept bursting into applause almost at every song.

What was also fascinating is the incredibly clever stage management to the point we feel that we should almost see it twice to get the various declinations of symbols such as the High priest carrying his David Star as a burden, the eye of god, the incarnation of the divine breath, the stone on stage to remind us, maybe, not to cast a stone too fast…

the cosmopolitan mixing of the two parties with the deity symbolised by a dark angel of death or inspiration. 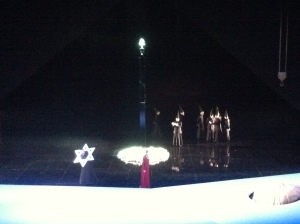 You know by now my devotion for operas and can find on my dedicated page some more about it.

The downfall of the statue of Baal, then end of paganism and the triumph of monotheism.

The divine breath “incarnated” by a black angel

I am sure this new production of the Grand Théâtre de Genève, under the magical John Fiore,  with two Nabuccos (I saw Roman Burdenko), two High Priests (I saw Almas Svilpa), two Abigailles (I saw breathtaking Elizabeth Blancke-Biggs) will circulate in Europe. If and when it does, don’t miss it (for the Genevans, you have one more week till March 10th!).

This opera is doubtless one of my favourites, in (good) company of Madame Butterfly, Norma and Aida, Il Barbiere…and so many others I’ll hate myself for having forgotten to mention. What about Wagner? Well…let’s say I can enjoy a Wagner once in a while but truly have never been that extatic as by some composers, such as Mozart, Verdi or Puccini. I tend to find Wagner almost brutal if you excuse my very Jewish sensitivity, but of course, have enjoyed the stage management and the story telling of Richard’s operas ;-)….So although I chose my side long ago, Italian über alles…and if it’s Mozart, all the better! I let you discover on my opera page the operas I’ve particularly enjoyed….I’d love to discuss this furthermore with you and thank the Grand Théâtre for this amazing and breathtaking performance that made me…lyrical! I found myself more than once on the verge of crying, a sure sign of a successful opera (in my eyes, quite litterally!). 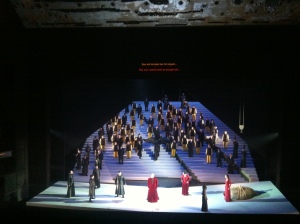