From one Bolivar to the next (Cusco Day 1)

Yesterday was relatively quiet and that’s a good thing because the pills I’m taking against mountains sickness seem to cause me a rather sleepy state. Apart from that I’m absolutely fine…so far.

Anyhow, yesterday morning Miryam and I had breakfast at my beloved El-Patio with another member of SLonFB. It was a fascinating conversation both about sociolinguistics and about the academic small (and at time) dirty world. I’m thinking of opening a wailing wall on ASF!<a

Anyhow, it was a pleasure to meet up with our members and colleagues for a live conversation as if we had always known each other!!

Then we spent most of the day in the intricacies of getting a plane ticket for Miryam. You'd never believe such a complicated process: you book at one place (because on the internet, you'd use a credit card and the charges would be 20% higher), then you have to go to a supermarket (and be careful, they'll also charge, depending on the one you choose) where you can pay…except that in between the two actions, given the deadline at 11:00 pm, we went to a lovely japanese restaurant and to the exquisite Museum of Anthropology in the House of Simon Bolivar. I saw there some absolutely exquisite artefacts which bear a testimony of the great civilization which existed more or less while our own ancestors were figuring how to make a decent fire…talking about decency, some potteries are rather rather…osées!

After our visit, then, we went to the supermarket as indicated by LAN to discover that the flight option had been cancelled. Add a long phone call to try to explain the case, another trip through the city to settle the case…on the phone again

We finally made it (well it took two hours no less!) and headed back to Miryam’s family as she kindly hosted me for the night in her wonderful house with her charming mother and adorable brother. Can you believe it, as soon as I saw the bed, my eyes closed no matter what. I attribute it to the mountains sickness pills…anyhow the result is that I slept like a log and simply took my flight today to arrive to Cusco.

The beauty and charm of this city with so much history and mysticism is simply impossible to describe. I just followed any road and ended up at the amazing Qorikancha. There, just like yesterday at the Museum of Anthropology, I wanted to cry at the brutality of the Conquistadores. These are the same brutes who kicked or killed parts of my ancestors, so I certainly relate to the resentment over such terrible deeds. In these moments, I really hope there’s a god to punish them the way they punished Tupac Amaru!

As usual in Cuzco, the guides are really great and my guide at the golden temple (I refuse to give it a Dominican denomination although these dominicans are certainly doing their best to be forgiven for the Church exactions. They are true modern art sponsors!)…my guide at the golden Temple was so nice and knowledgeable that I asked her if she could think of someone like her who would take me to Cuzco….Sitôt dit, sitôt fait, she called the one she considers the best, Wilbert, who met me half an hour later, took time to understand my need and budget and met me again at 7:30 pm with several enticing proposal, the result of which is that I’m going to skip the last two days of the conference to visit the sacred valley, sleep in Aguas Callientes and…YES, THE MACHU PICHU ON THE 18TH….YEAH!!!!

Coming back to the present day, I should justify my title…can you imagine that after having visited Simon Bolivar’s house yesterday, I met Bolivar, a cartoonist who is holding an exhibition in Qorikancha. A man of great talent, even that of not taking himself too seriously! 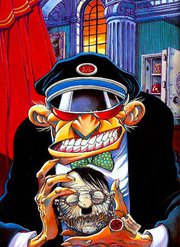