As I’m packing for the International Seminar on Teacher Education for Peace and Harmony I keep listening to the overwhelming media campaign regarding his latest book. He certainly doesn’t need further advertising since he’s on every program I’ve been listening to in the past week….Yet….

He’s probably the guy because of whom I’ve dedicated my life to languages. He used to be brilliant and his real gift for languages probably classifies him among the genii of his time (let’s give him some further latin after all…). However, the more I read and write and teach about sociolinguistics, the less I admire the man…sadly! How well I remember him in this TV programme all France used to watch, Apostrophe by Bernard Pivot. Claude Hagège, then, was so convincing, so wonderful with his many stories about languages, that I decided linguistics would be my life. But this was in the 80s….Even when I started this blog, even today, owing what I owe him, I entitled by bibliographic notes by his name

I didn’t read his book published this year, some 30 years later, and I probably won’t. Then, why criticise? Well, simply maybe because I keep hoping that what he writes is better than what he says.

People literally make him come to laugh about him. He’s a kind of sad puppet probably envious of some of his old colleagues’ success and wishing to surf on the wave of the anti-political correctness. A kind of linguistic Indignez-vous…

My publications and this very blog are a living scream against la Pensée Unique, an untranslatable item, pretty much like La Langue de Bois (Orwell’s Novlang). I’ve written over and over about the necessity to think out of the box and Académie Sans Frontières, which takes me indirectly to India tomorrow has always been intended to make scholars and teachers refuse the mainstream thought and make sure their students and pupils think by themselves rather than via generalized easy-to-digest preconceived ideas.

However, thinking in English isn’t, as Mr Hagège with his 1950s ideas seems to assert it, a mainstream thinking. English has long been “the other tongue” of billion of individuals worldwide. It’s the language enabling me to correspond everyday with masses of colleagues throughout the world and it’s the language in which I will make my presentations next week simply because I can convey my message, my French way of thinking, my Mediterranean background, my history, my cosmopolitanism, to more people who don’t have any more time to learn French than I have to learn all their other languages.

Espéranto would probably be an alternative but despite my sheer interest, I can’t see it replacing any living language. Spanish takes me some way, so does German and even a little bit of my broken Hebrew…but Mr Hagège can’t expect the whole world to enjoy the gift he’s fortunate enough to have been granted (and actually probably needs to demonstrate one day…but this is besides the point). Mastering more than 4 or 5 languages is proved to be detrimental to the literacy you have in each of these languages. The friends I know who write the best are usually unilingual speakers… So until we are perfect human beings like him, let’s consider English the language of Shakespeare, of my Indian colleagues and of any scholar who wishes to be able to cross imaginary linguistic borders to be within a community of different minds and different ways to apprehend a language which may not be so universal (go to Latin America where Spanish is the Pensée Unique…) yet universal enough for our Academy Across Borders.

Criticising the predominance of English is easy…if you speak this language and use it everyday in your practice, Mr Hagège, but telling people it’s bad because it’s associate to global economy isn’t only pitiful, it’s even dangerous.

So learn your own language well, learn English, travel, and you’ll feel like learning more languages. But please, never say Mr Hagège, that English isn’t nice to listen to, that it’s not euphonic…it’s called linguiscism almost as nasty as saying you don’t like blonds or red-haired people.

I’m off to Delhi and Sardarshahar, happy that my regrettable ignorance of Hindi, Urdu, Punjabi, Rajasthani, Marwari, Mewari, Dhundhari, Mewati and Harauti will be forgiven in my attempt to deliver my message in the international language I possess best and that I’m fortunate enough to share with my colleagues. 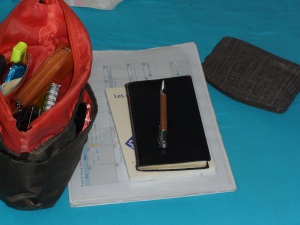