Adieu King Father and Welcome to the New Lunar Year

I discover now that not only is my thirst intact, but if possible, it’s even greater, as the more I visit, the more I would like to visit….

In this flood of sensations, memories, feelings, sights, Phnom Penh will definitely be a cornerstone, a milestone really if one thinks the purpose of my visit was uniquely to be among Sihanouk’s people to mourn a great man and a symbol of our history from as long as I started being aware of international news.

I had no idea the form my tribute would take, I only knew I had to be there. If you read French, you will find some preliminary anticipated thoughts and nostalgical recalling of my attachment to the dramatic character I truly discovered in on stage.

Those of you who have been following my past three months may also recall my mentioning the very instrumental part journalist Michel Somsanouk played by accident in my introduction to Laos….

I knew Michel to be in fact particularly well connected in the whole region (I’m not saying in the whole world but truly believe it is the case….). So during one of my numerous but too short visits to Vientiane, I told him about my intention of attending Sihanouk Funeral Ceremonies. Not really hoping for much…but just in case !

Prior to my own departure to Phnom Penh, a friend even tried to persuade me not to attend the Cremation ceremony by sending me a copy of the warning issued by from the French Ministry of Foreign affairs :

Of course I never took, quite rightly, such advice seriously as it was the very purpose of my visit and touring other sites only came second. In fact, now that I can look back on my whole trip, honestly, people were always more central to my quest than monuments and the only exception will be the Angkor Wat which I am planning to visit next week-end, as a final note to this journey into my fantasies.

Anyhow, the dream come true is that my friend Mixay/Michel eventually attended the funerals, and by total coincidence (right time, right place…or call it destiny !), he introduced me to HRH Prince Norodom Ranariddh who is a former prime minister of Cambodia, a present president of the Privy council …and a political science professor at the Aix-Marseilles.(LINK)

Upon hearing of my wish to share this historical moment with his people, the Prince was deeply moved and kindly offered me the amazing opportunity, just a couple of hours before the actual ceremony, to attend this event with all the selected guests.(luckily I had brought with me a suit for this very purpose when I packed back in November in Geneva!)

The previous evening, immediately upon my arrival, I had been able to mix with the « petit peuple » and thus experienced how it feels to be left on the doorstep of an event you’d really want to be included into.

I admit having felt a real pang of guilt in being able to share this incredible event from within after having witnessed the devotion from outside on the previous night. Both inside and outside were an incredible experience anyhow. 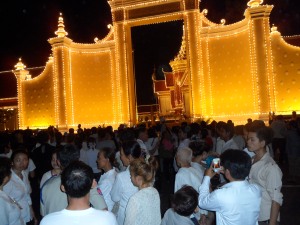 People were so nice to me, handing me lotus flowers to put on the various devotion altars dedicated to the prince, they gave me the schedule of each event and the way to attend them from closer…

The fact remains that I will never be able to express the extent of my gratitude to HRH Prince Ranariddh and his lovely wife for making this possible and thus achieving my dream of taking an active part to the ceremonies. I truly think I will never forget having been there and then, as I never forgot being part of the Malraux Tribute in the Cour Carrée du Louvre a long time ag.

Upon arriving at the Royal Palace, we were given a wooden object which we had to deposit, after a courtsy to the royal coffin, on a table We were also extremely grateful to be provided with a fan, a remembrance book, a prayer book and a bottle of water.

Given my late notice, I didn’t wear like all the other guests the official pin nor did I get an official seat, but some friends still managed to make sure I was properly seated on the French Delegation seats which had apparently never been filled up to then. I felt actually entitled to use these seats left empty but France was anyhow extremely well represented by the Prime Minister Jean-Marc Ayrault in the Officials Pavilion 10 meters away from my pavilion.

Another unexpected highlight of my trip was meeting up with Philippe, the friend of a old school-friend of mine who, upon hearing I would be in Phnom Penh, told me I had to meet up with his buddy. All I had to do was identifying a blue cart and a french guy selling crepes. Of course, I contacted Philippe via Facebook and with some details such as the fact that he was selling his pancakes in front of the Lycée Descartes, I not only saw him but spent an evening with him and his lovely Thai wife at the Raffles.

To make a long story short, this 54 year old man who spent his whole life in the sales department of FNAC and whose mother owns a concession for crêpes in a public park, can literally no longer live in France. Unemployed, unable to work in his mother’s concession which he can only re-sell although he’d be perfectly adequate for the job, he’s now having a new life in a country which allows people like him to have another chance. Sad but true…and not even so sad as he found happiness with a beautiful Thai wife ready to follow him out of love.

What is extraordinary during this trip is how I could have rich and vibrant conversations with people of all walks of life. In Europe, this would have been almost impossible, but either due to my status of foreigner or volunteer or crazy …mature and single woman, I became the producer of a spanish singer, the guest of royalty, the copine of a crêpier, the confident of a thai school director or the photographer of a Lao journalist. Nothing is impossible and of course, for the founder of the borderless academy, this makes perfect sense, yet it’s always an immense pleasure. In brief, nothing is impossible in Asia and you should always be ready for the unexpected.

I will not detail here the rest of my visit but I enjoyed the Market, the National Museum which hosts amazing pieces of Khmer Art, the Mekong River banks, the FCC (mythical Foreign Correspondents Club) …and cried during my visit to S21, a reminder of the atrocities man can commit against man. In this particular case Man against Education and Culture. So many teachers, students and educators died simply because they were educated under Pol Pot. I will only attach one photo, that of a surviver, who lived to confront and accuse Duch recently. As a Jew, I believe I felt a pang at some other atrocities of another scale, yet just in the same range of horror when man kills his fellow-citizens for absurd reasons. Bou Meng’s book is subtitled: “Justice for the Future, not just for the Victims“, this says it all!

Yesterday, I was in the Mekong delta, discussing with a mainland Chinese the difficulties for him to find a wife, and last night I celebrated the Tet with two Indian ladies from Malaysia, a Welsh Australian, a Singaporian businessman…How could I resist being literally enthralled by the magic of what is still very much in my mind the mythical and magical Indochina…Saigon encompasses absolutely each and everyone of the many feelings I have experienced so far, the pearl of my 3 months tour, almost equaling my beloved Hong Kong.

So, from the fires of Life of HRH The King Father to the celebrations of the Têt, let me wish you all a Happy New Lunar Year, the year of the Snake, symbol of feminine values, which I hope will prevail in a world where Women’s rights are still largely a mere figure of style.…but this will be another story !