Jock Hill: Our knowledge was stolen and I was a founding player, a professor of indigenous studies at MacMaster. Lacrosse team. Reinforcing identity.

Most important is having a great sense of humour. Service to our people and to the world.

Mohawks, senecas, 5 Nations until 1711-22 a sixth nation came. French call us Iroquois and we are Haudenosausee. Since 1965, I’m a peacekeeper. When I was asked I believed I was not up to it, still think so but it takes 10 to 15 years to become a leader, not only for my people but for all the indigenous people of the world.

You have to be fair to the people, you can’t favour your own family. You are responsible for everything, the things you don’t even see. We’ve got long ways to go.

I’ve been in Councils ever since my voice changed. Since they age, I was interested all the different languages being spoken . We have some that are trained at every generation to keep our knowledge and I’m one of them. We need to connect with young people.

Mothers have a higher respected role in transmitting our culture

Early 80s and 90s people started arguing what was good and bad. You don’t discuss our teaching : have a clear mind and see things very plain, right to the point. We are very hands on. Our learning is a bit different and we have to reach our young people!

The creator gave us thanksgiving to give thanks, it’s a constant cycle

Creator gave us a fire around to gather around and discuss.

Changes: Dutch, French, English, Americans, Canada. We are the elder nation, they are our nephews and nieces

Rick: how do you thicken your skin, deal with criticism? Our traditional leaders need diplomatic skills to deal with our treaty allies…

Turtle island now called America Cf Felix Cohen, the Americanization of the White man. We weren’t prepared, amoral governments. 1977 haudenosaunee to Geneva and I thought (I was quite naive) we’d reach something but I saw the same faces but you’ve got to be there!

If you’re not at the table, you’re on the menu!

Pay attention to that, samis were with us and still are. International work is fundamental.

Don’t go there as domestic people but as sovereign Indians

even as a Lacrosse athlete we were diplomats. Pushing our hunting and fishing rights in the 80s. From the late 80s I learned what it takes to deal with all sorts of issues.

Everlasting peace, we are equal, mutual good respect renewing treaties engagements to last “as long as rivers are flowing, as grass is growing and water is running”. 400 years went back since that treaty with the Dutch. But our treaty partners tend to forget…some come to the table without the knowledge and we need to bring that understanding and be thick skinned. Respect, appreciation, strive for peace are the main elements of our treaties.

Rick Hill: do you have some advice to indigenous students ?
Oren Lyons:

know who you are. Suicides are the achievement of erasing your identity we are who we are. Keeping your ceremonies in your language and instruct your people. Nation, history and identity. We were up against as haudenausonees we can’t be Christians

I get to speak in The language. I’m called upon to speak to our members who take schooling out of our communities: know who you are. We need to keep what’s important to us yet be educated
Oren Lyons: no matter the child is, we are his uncle, we are one family. Someone once told me: e”As far as I can see human species is a biological experiment”.

You come from different regions of Mother Earth. The elders ordered me to get involved, but we are all here respect, caring, sharing. Don’t separate and form groups about what’s right to do! We are one family, no matter who we are like dogs and come in all size and colors yet we are one family 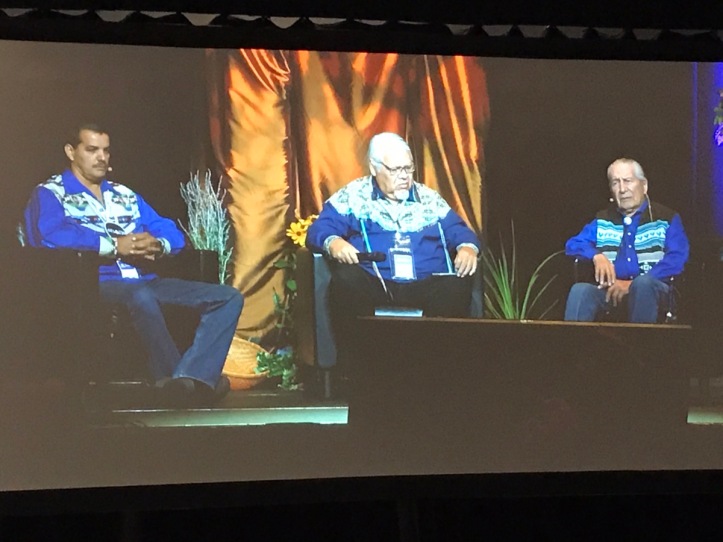 Other sessions on Thursday:

Not so long ago one of our languages died out.

Loabák 426 municipalities and we are 11 sámi 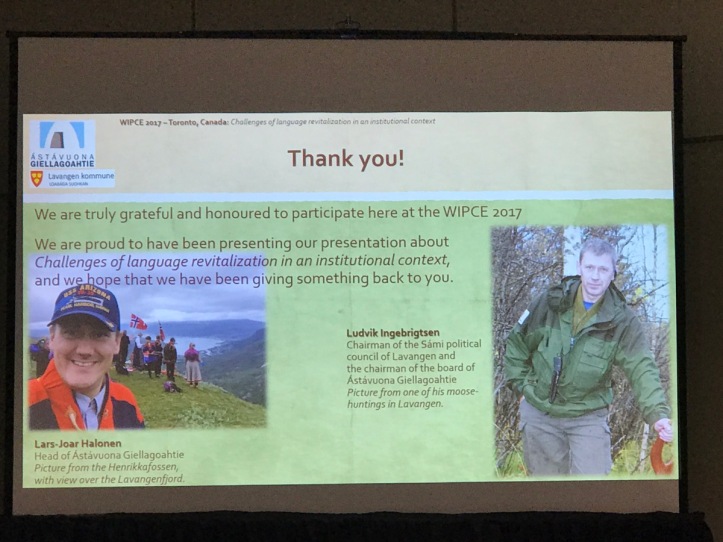 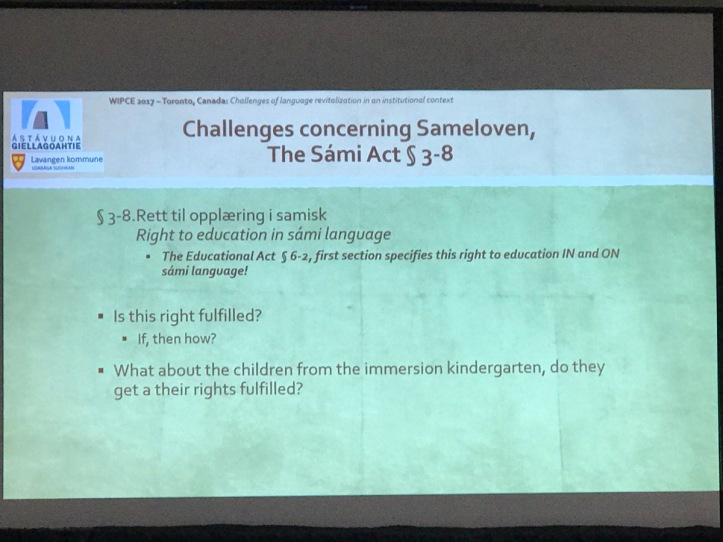 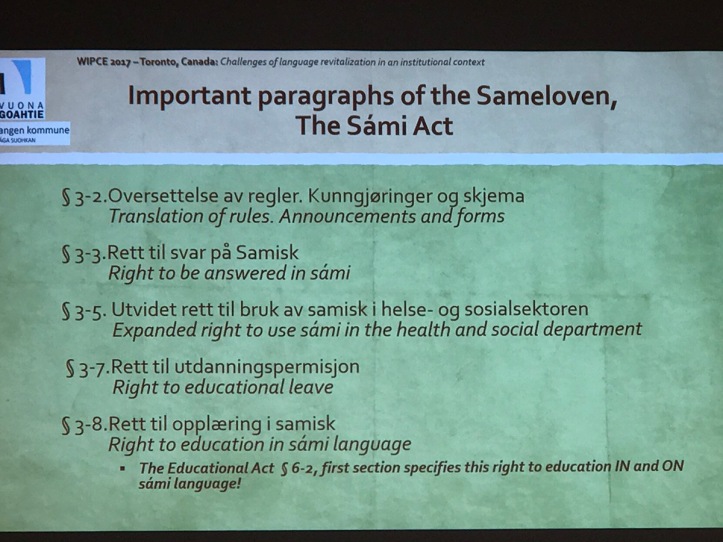 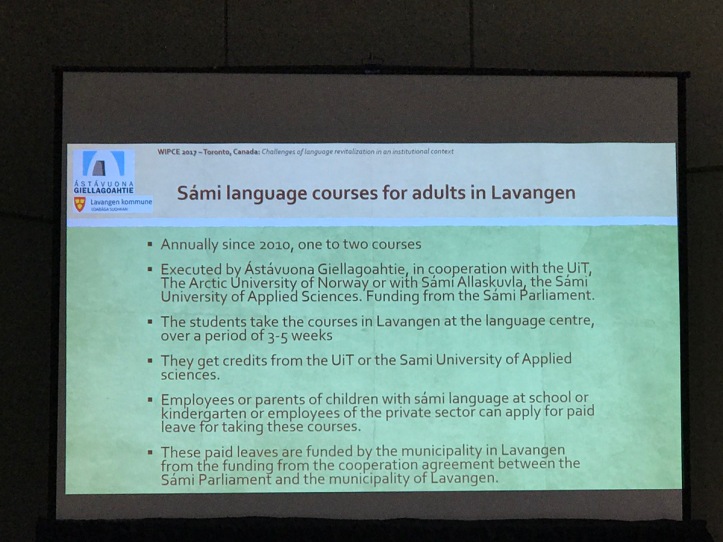 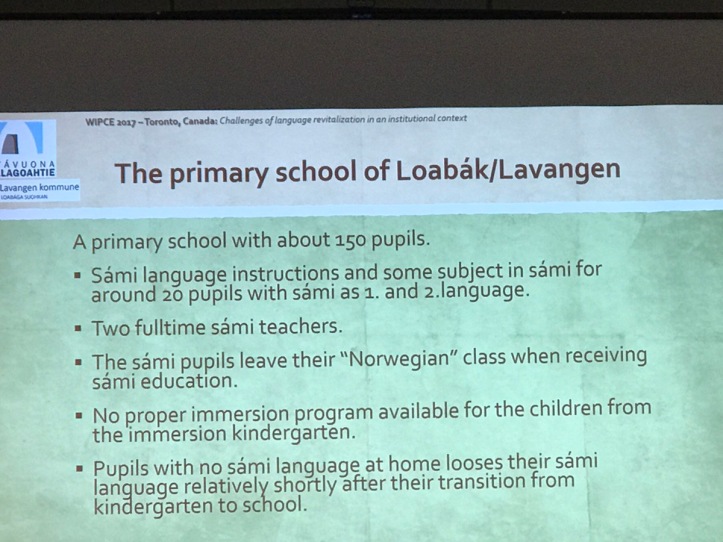 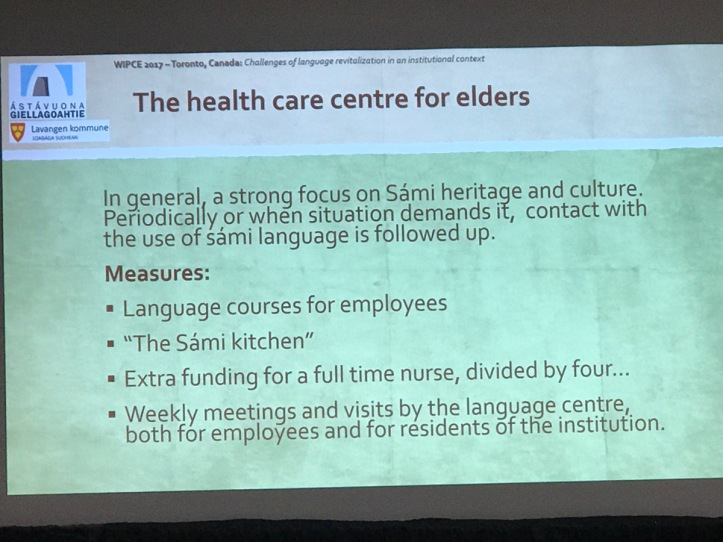 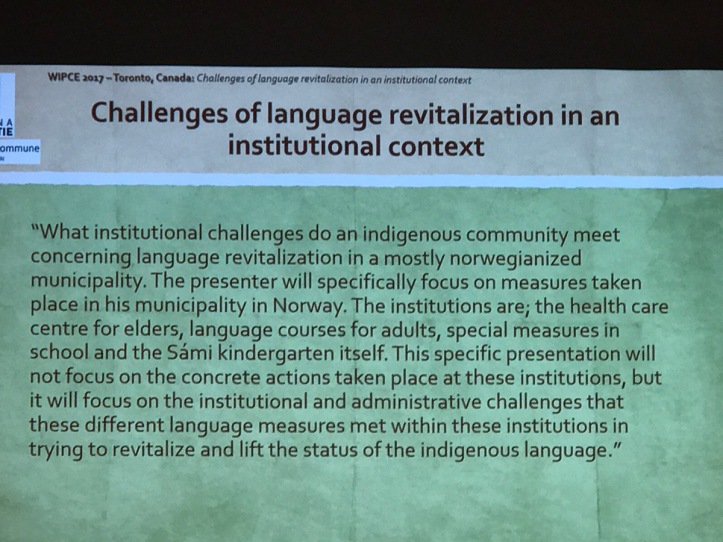 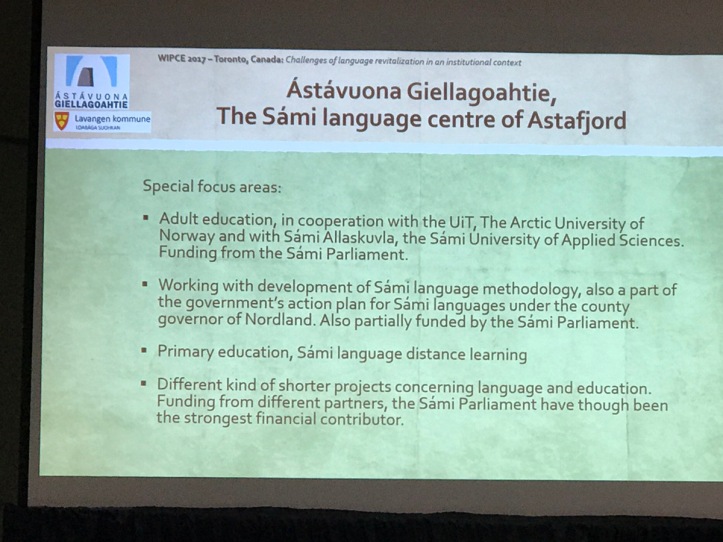 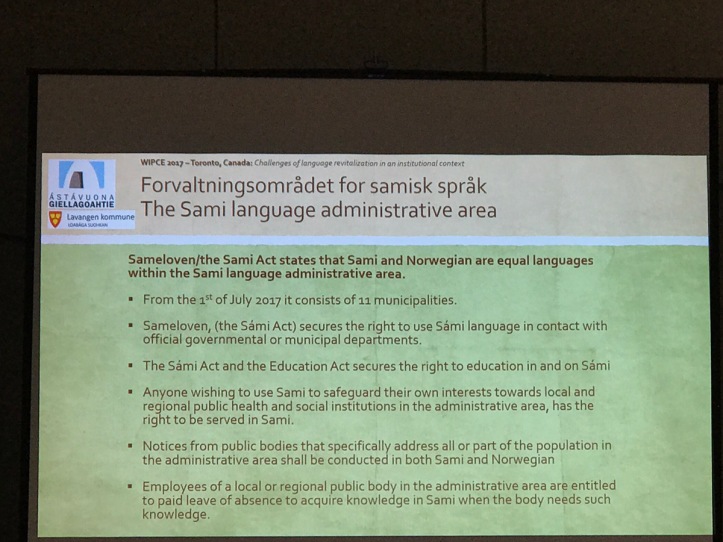 Lars-Joar is a teacher among other responsibilities.

The Sami language isn’t really a living language. Outside my home my 5 children don’t speak Sami language. Most people have lost it but consider it their “language of heart”

Why aren’t we succeeding more?

Sami primary school: Sami heritage is present despite the rapid loss of language

1 week every month language courses with paid leave for adults!

We are lacking Sami speakers who could teach, no lack of funding. There is a wish to continue the language immersion after kindergarten yet it’s not happening. There is no sanction but it doesn’t comply with Sami act paragraph 8.

Question from audience: What if parents take it into their own hands as they do in New Zealand ? The Sami are working on establishing an ubwakcenter (sort of post school system where children go after school before being picked up by their parents) in Sami

Curriculum is there thanks to the Sami parliament.

We are sort of a success story yet we’re long way to go.

Until 1969 it was forbidden to speak or teach Sami 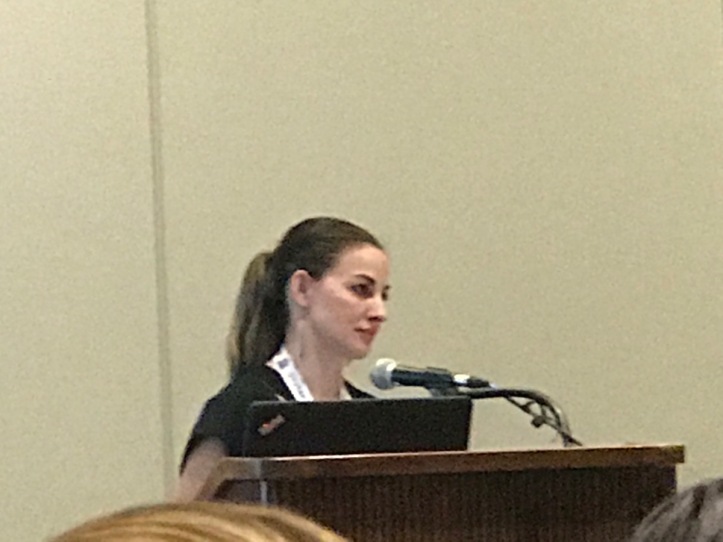 One of the most fascinating presentations I was able to attend. Thank you Jessa!!!

Research questions, what can 35 female indigenous student voices tell us abouttheir contemporary boarding experiences and are the experiences of abo girls in boarding schools similar for those of Maori girls attending boarding in Aortearoa New Zealand.

In Australia we are not as advanced as other indigenous around the world. My university didn’t offer indigenous studies the way we, indigenous people intended

We have our own ways of being, of knowing and of doing. Who I am influences my research.

I’m not here to look and find, I’m here to listen.

Gathering grass: researcher introduces the concept of research: process was like weaving

Research is explained as aprocess they will lead on a topic related to their lives
The group yarns potential research questions or ideas
Potential audiences the project can speak up to are also discussed in yarning circles.

Preparing the fibers: Group yaring circules and sharing of stories on the board topic chosen by the group, then learning to weave: researcher introduces ethics of research, any restrictions regarding university/outside factors, and processes of photograhy. Cultural ethics and particiant yarns on other ethical considerations. Yarns about photography use (cultural consideration, angles, colour, symbol, lighting)
Provision of cameras/camera-phones if needed, yarns on use of social media for sharing images.

Weaving together: Collective dicision on the research group to be looked at by the group, yarning circule on the question and responses to it. Participants take 10-15 photos on the issue 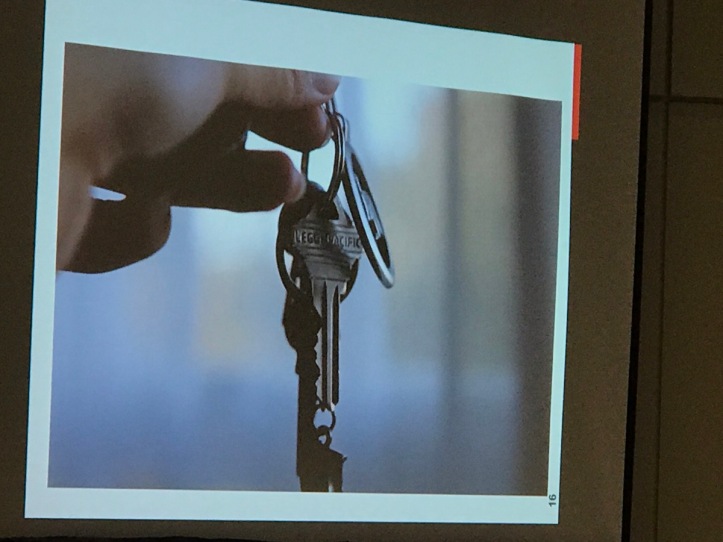 locked away, key to freedom, missing home. “The boarding aunties (supervisors) carry the key to jingle to show that they love us”

Photo about Ayer Rock: you can’t tell who I am by what I look like.

Photo of an exit: I know I’m trapped but only for a short time so it’s worhwhile 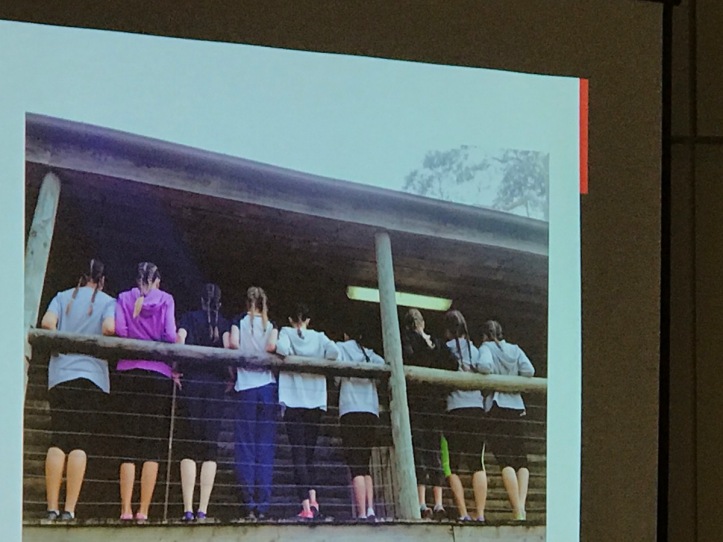 Finishing the dilly-bag: Stories of images shared by individual photographers, all images collected and organized into groups according to themes, yarning data transcribed by researcher and themed by group, particpants selected that best represent each major theme for exhibition, participants organize and run their own exhibition aimed at their chosen audience, researcher produces work to extend the reach of the work (publications, presentations)

Photo of a prisoner.

Feeling trapped, difference between living in community and living at home.No shoes at home and wondering why she had

Students spoke about their photos in the exhibition they set up on their own. A girl sang never seen a diamond in the flesh (because she thinks no one understands what it means for her to come from a very remote place to a big city)
cf. slides themes from college A

Conclusion and findings: CF. SLIDE Homesickness, feeling cuaght between expectatins of home and school, importance of/lack of culture at school, becoming a different person because of boarding school, being given opportunities, a bighter future, seeing home differently, bonds of frienship/sisterhood

Frienship and isterhood in the 3 colleges show what restrictions operated between Australia and New Zealand and the girls got to see each other picture.

Question about racism both ways, at boarding school and back home: People call me white now. One girl dropped out because of that. A lot of time, mothers ask their kid to come home to look after their siblings. A young man committed suicide

All three schools were faith based (they all get subsidies from government based on the number of indigenous students they enroll.)

Acknowledges the elders, as a florist daughter appreciates the outdoors in. Verna Kertnes, Rebecca Jamison who is fighting hard for a University. All the clan mothers who welcomed out.

In canada, we are trying the right the wrongs of our colonial past. Healing was defined as decolonization therapy although deprogrammed might be more appropriate. To learn on both sides to do things differently, with Indigenous to take things into their hands. if education is what got us into this mess, then education will take out of this mess. Model with a secure identity.
Countries like New Zealand give us the illustration of what to do. It is about knowing the truth before you get reconciliation, but then you can unknow the truth

From to Coast to Coast, they want their language, they question the school calendar, goose break and moose break, Le gouvernement du Canada s’engage sur la façon dont nous pouvons transformer l’éducation
Also be able to google their homework. Want to speak their language and help their parents who lost the language to learn their language.
In Canada, we have good example: in Calgary with two years in Inuktitut, they had to change the calendar because literacy improved so drastically
In Ontario, model school literacy program: I used to be a good teacher, now I’m a great teacher
For years, we’ve known that first nations education should be in the hands of first nations.
We are getting there. The government in Canada believes that every child deserves the best start in life, Our PM was a teacher. We are a little jealous of Finland where teachers are regarded as the best occupation and that you only become a doctor like me if you couldn’t get into teacher education!
Exciting time. Message about youth and hope: BC totem pole for reconciliation. Children have no feet above residential schools. Eagle on top.

Killers of the Flower Moon : a must read (Rachel Sayet’s suggestion)

PS: WIPCE NOTES WILL BE ADDED TO THE INDIGENOUS POPULATIONS AND LANGUAGE RELATED ISSUES PAGE