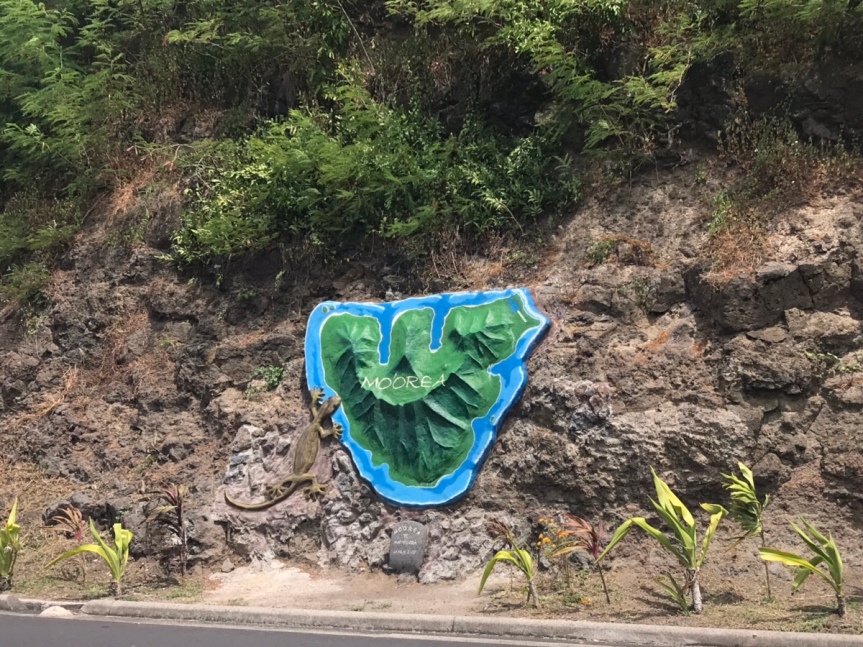 Those of you who care to read more than my blog picture caption – and actually click on the link – know that I don’t overplan my trips as I welcome the opportunity arising by mere chance! This discovery totally fits in with my travel pattern…

Having 5 days to spend in Tahiti and despite the fact I had by far not seen everything, I still remembered some comments from my cousins about Moorea, the heart shaped island(and Tetiaora for that matter!) being worth a visit…

My love for birds and Brando and my budget being lesser than my wish to discover Cook’s Bay, I decided to embark from Papeete on the Aremiti one rainy morning 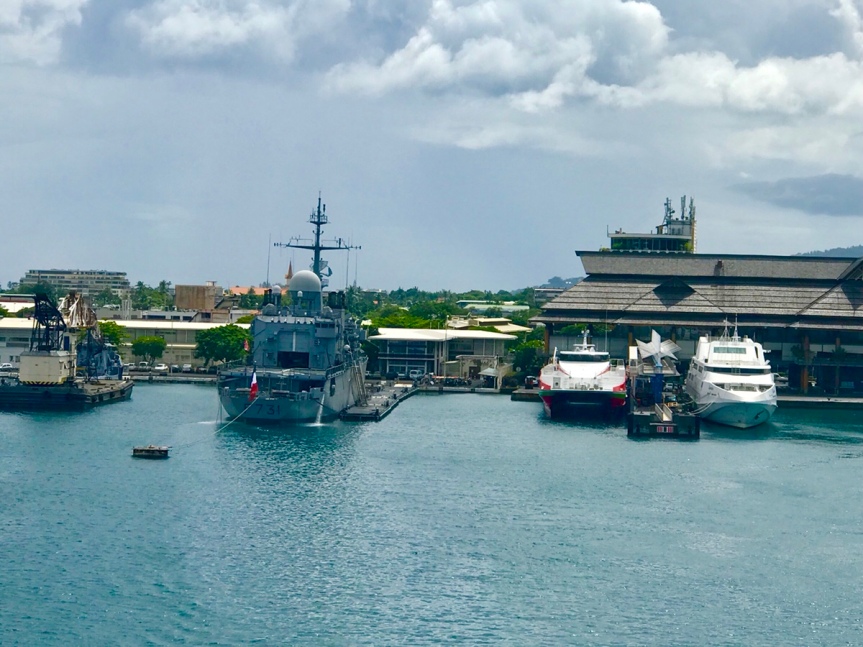 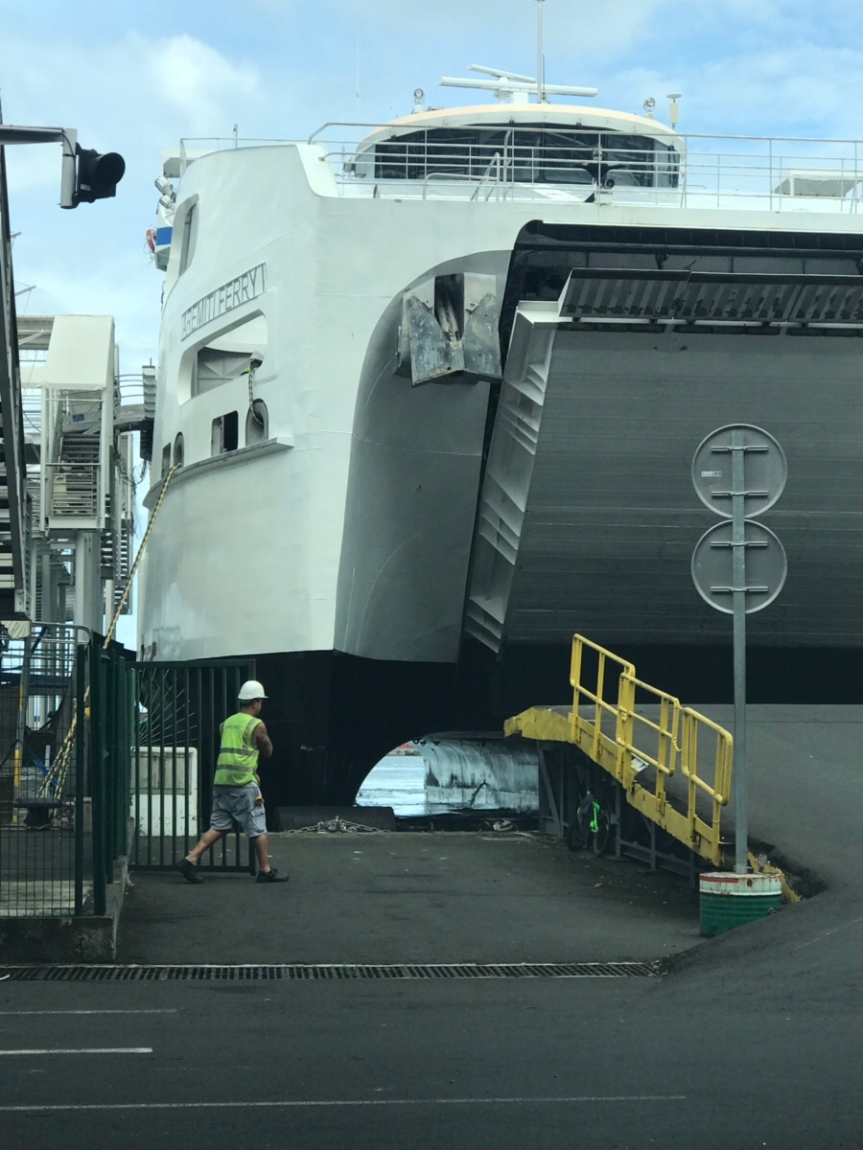 for a day visit.

Trust me, signposting in Polynesia relies a lot on your intuition and by the time I figured where I had to embark, I saw the ferry close its gate and thus waited for the next one two hours later!

On the Ferry, I met a couple who was also going to share my Aranui cruise, Annie and Jean-Luc, French Expats in DC, like so many I’ve met during this trip, from novelist Carène Wood whose books actually explain this French migration aspiration, to so many others now settled in Australia, the USA and of course French Polynesia!

Having now visited quite a few Islands, I’d say Moorea has it all at a stone throw from Papeete : excellent infrastructures (hospital, maternity, schools and even a CNRS research center, 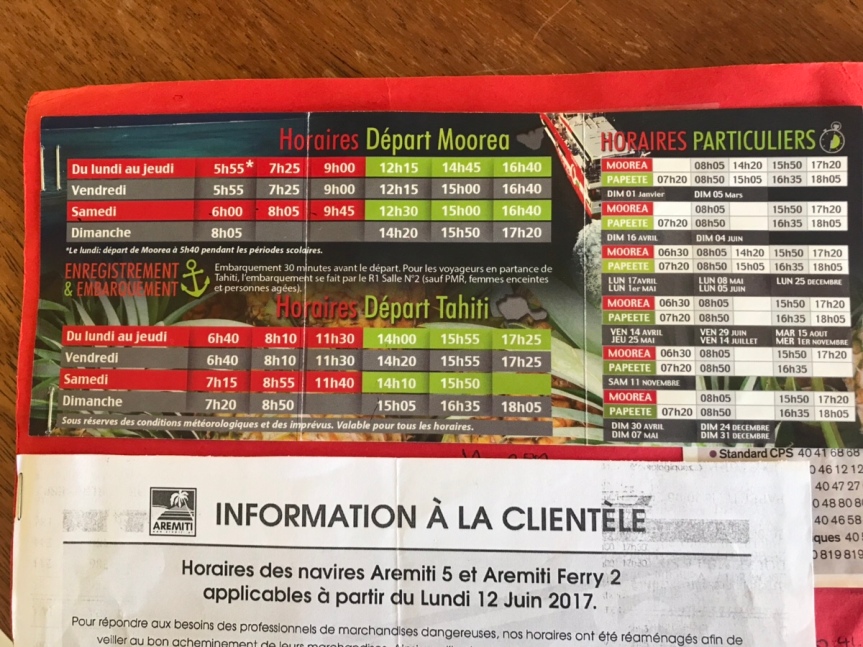 the mythical Bays of Opunohu and Cook 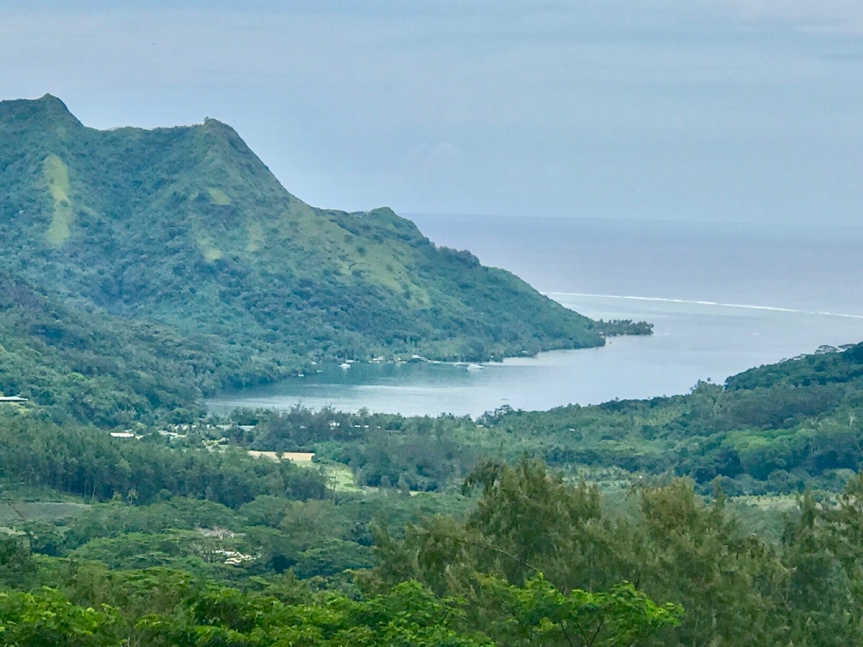 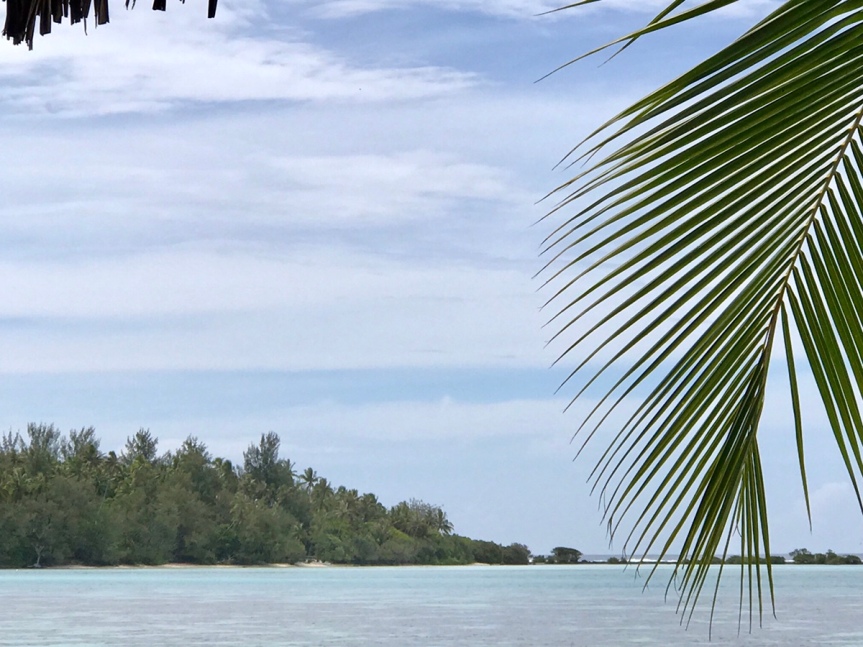 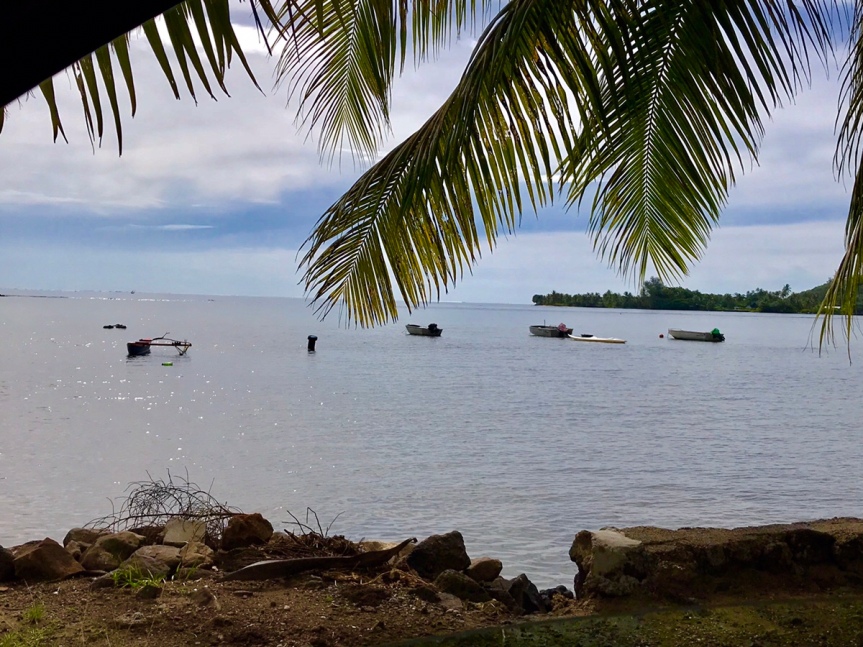 Such as this magnificent Marae of Opunohu, 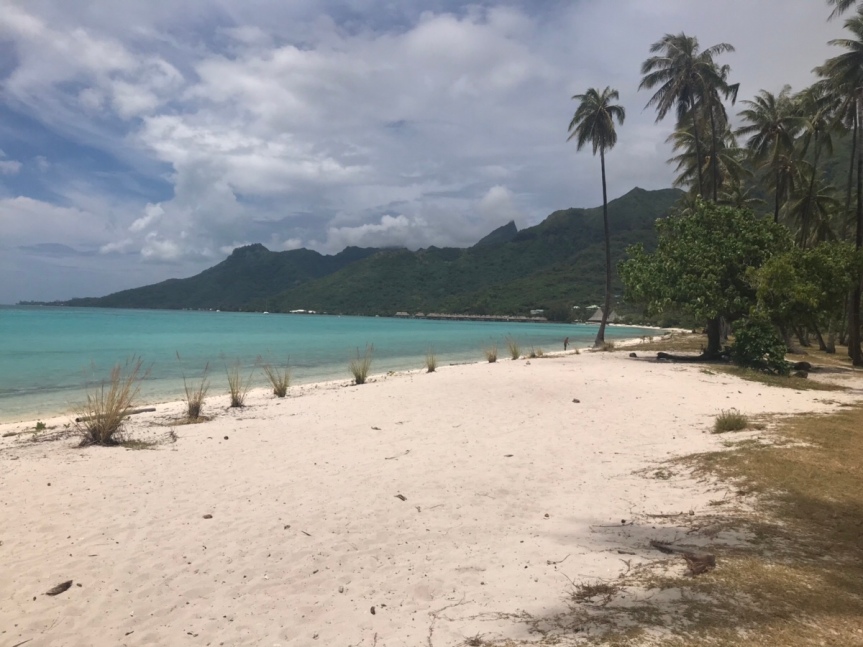 so after checking the white sandy Temae beach where you are warned that you aren’t totally safe …I decided to drive around the island and stop wherever I took a fancy! After a few kilometers, I saw a young and very pregnant woman hitchhiking and bent my rule of avoiding to take strangers aboard. It turned out the lady was a navigator who, for imminent maternity purposes, had to make a halt and fell in love with the gorgeous peaks and lush vegetation

She returned my small service by giving me great tips for my trip, including the Belvédère 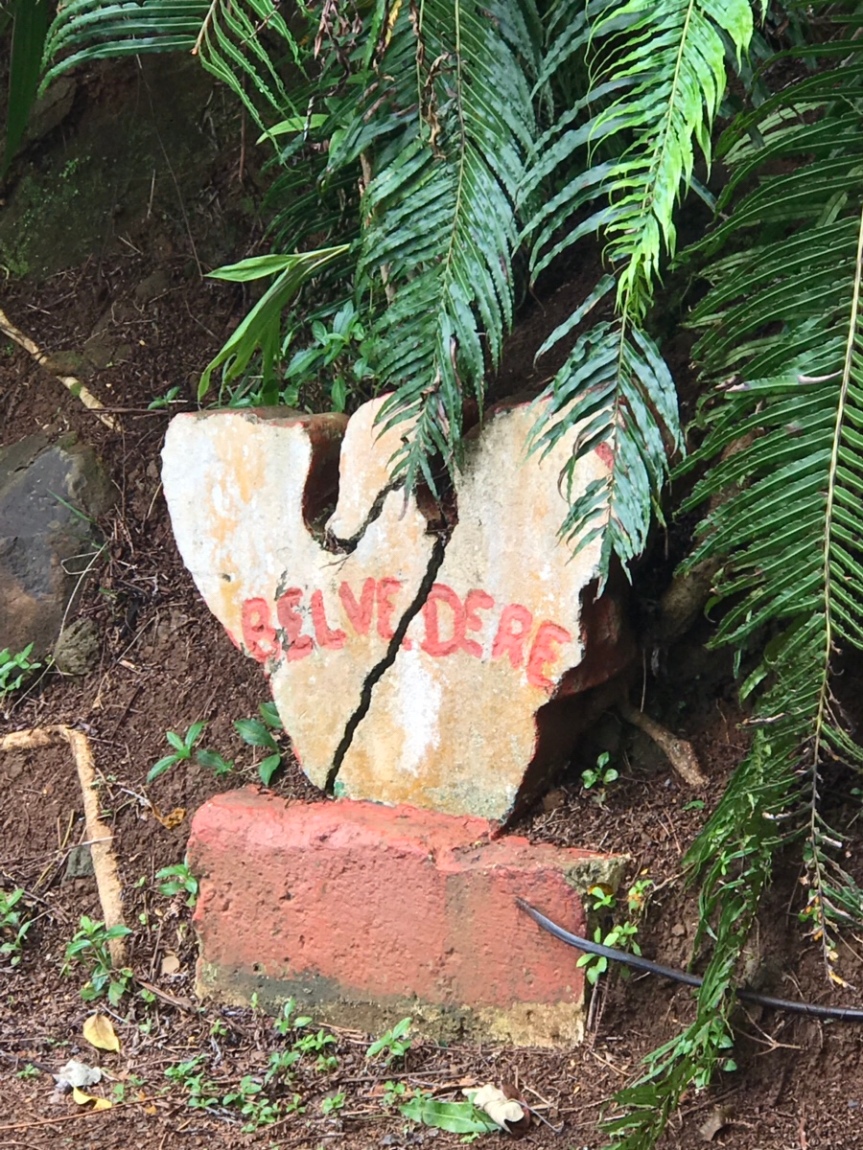 With its transparent water… and fish!!!

and thought some colleagues had found a real niche!!! So on my way down I decided to check the place just in case some colleagues were working (😂)… and if so, whether any of them was interested in helping me with my academic quest on the Pacific Islanders Triangle. 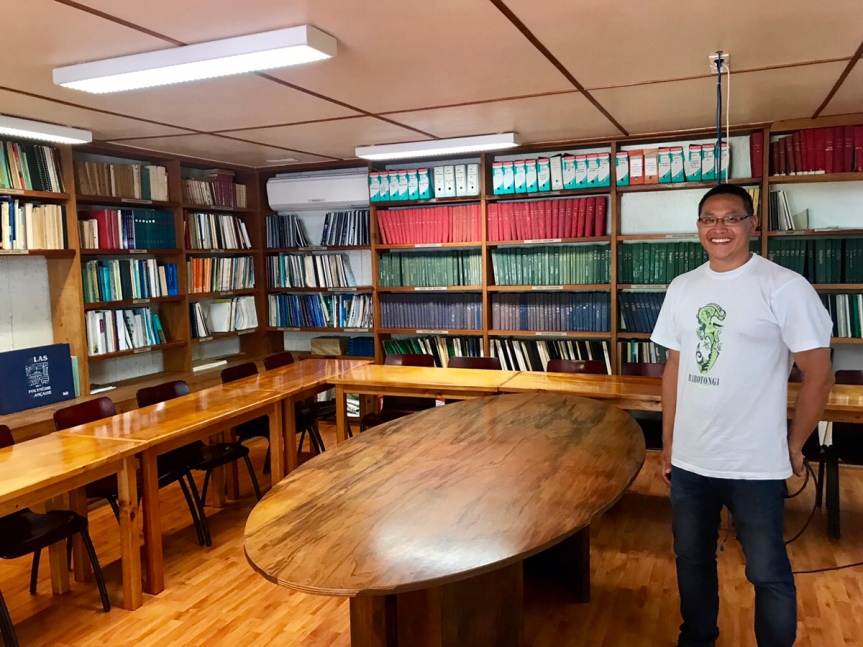 who was kind enough to not only show me the CRIOBE antenna but also put me in touch with a colleague, Tamatoa Bambridge who wrote fascinating contributions regarding precisely the indigenous issues I’m concerned with! The rest is history hopefully to be read in a few years among your good reads!!!

After this it was time to head back after a lovely swim and discussion with a school teacher who had taken her Tahitian option pupils (aged 11) to the Marae in Tahiti and was now waiting for the “Truck” a French Polynesian institution, to bring the kids home. We had an interesting discussion as I asked who spoke Tahitian home (3 kids out of 8), who spoke other languages (one English speaker ) and as I couldn’t understand what the children were discussing, she said it was a creolized vernacular made of French, Tahitian and bits of English…. 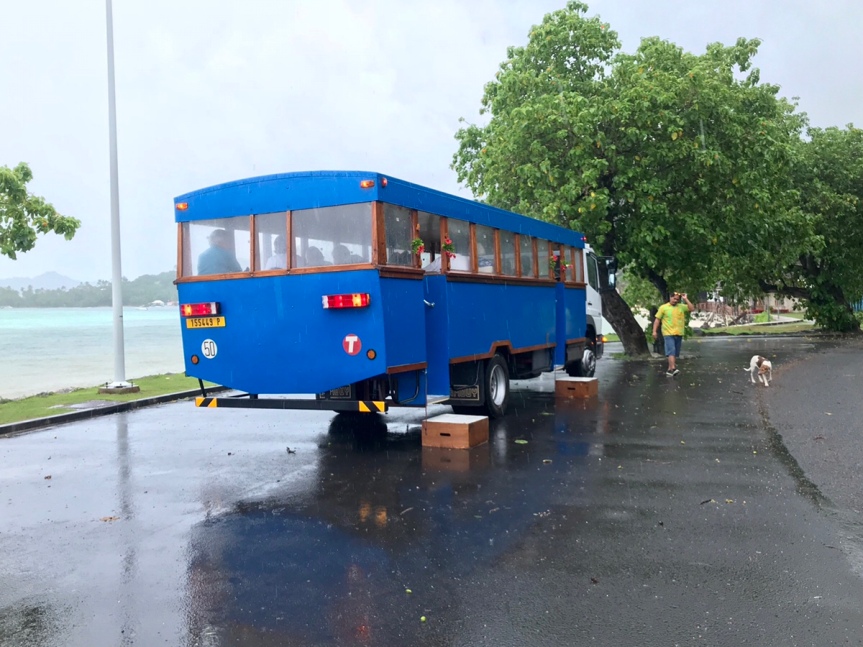 Once they left, a very well dressed Vahiné asked for my ticket and she won the first prize in my long ferry history ! 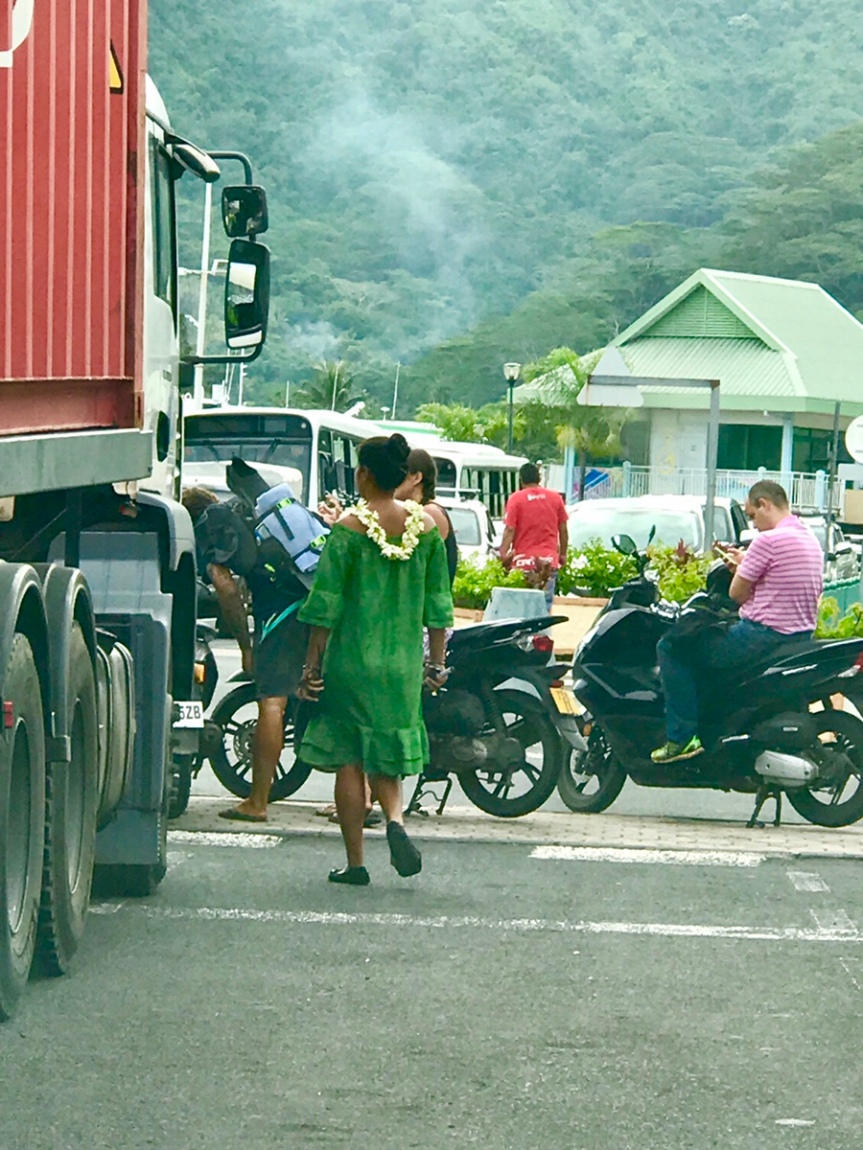