This is what I’m supposed to have earned yesterday, according to my dear friend and colleague, the extremely multitalented Professor Renford Reese !

But let me tell you how it all started….sit comfortably, sip a cup of green tea or a starbuck’s coffee with Ren’s quotation on it, ready ? It says: 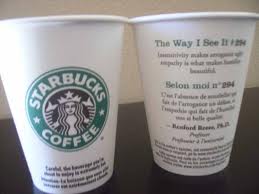 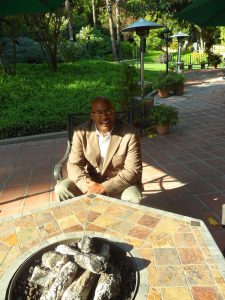 We had met back in TeL Aviv at the World Congress of Sociology 1999 and remained in contract throughout the years. Those of you who read this blog often get to read one of the great papers Ren is kind enough to share with us. He’s my guest star and got his page here! He also wrote a powerful and artistic article on The Linguistic Manifestations of Oppression: The African Americans Experience for the last issue of Droit et Culture which I co-edited with Geneviève Koubi earlier this year (Koubi, G. and D. Romy-Masliah, Eds. (2012). S’entendre sur la langue. Droit et Cultures. Paris, L’Harmattan). All this to say that I have the highest respect for the man and his many talents and I will no doubt write more about him in my Cosmo people section in the near future.

I’m currently reading his last opus, a marvelous novel I find hard to extract myself from 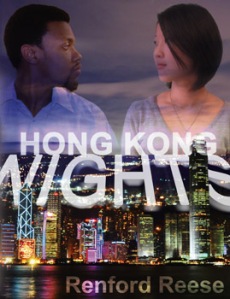 …a challenge when you are in beautiful LA!

All this to say that when Renford heard about my visit, he suggested me to come and talk about multiculturalism in Europe to the Inmates of the Norco Prison in California (click on the link).

Needless to say, I was extremely curious and interested to get to see the inside of a prison, and all the more a prison in California. At first, I was told I’d get to speak to female inmates, but it turned out to be men. And to spice up the process, once I was at the prison gate , Renford told me I’d me mostly addressing former gang members whose tatoes indicated the number of people they had killed, how they were divided into color group and couldn’t be mixed together…and how in Californian prisons, despite a ruling from the Supreme Court of Justice proclaiming it illegal, race segregation is still the rule, « like in the Churches » said Renford…a topic on its own indeed!

I was warned that I wouldn’t be allowed to wear any make up, no perfume and large clothes hiding my cleavage…I admit the third condition was the hardest as I happen to tend to wear tight fitting clothes and…well…rather demonstrative of the large attributes nature (too) generously distributed to me !

So I had to drive to beautiful Pasadena and get something tolerable. I even bought a back up at Macy’s that I disliked so much that I kept all tags and ticket hoping the first version would pass Renford’s sharp eye. Thank god it did !!!

Although Norco is a prison now, it used to be a luxury hotel

where celebrities such as Charlie Chaplin and Bob Hope used to enjoy. I have to admit that such a view

Is indeed a soothing perspective when you are locked in for a while and should I, God forbid, have to choose, I’d probably pick this prison as my first choice ! I might even in the future consider staying there as the prison will be closed in a few years and the City of Norco is planning on restauring the Palace to its past glory…never know…

So here I was, having left my bag and purse in Rens’s car, only allowed to take my presentation with me. Having completed the usual ID formalities, I was taken to an electric car to spare us from a very steep walk in the heavy Californian sun.

We even had to change the route as some inmate was being corrected by the wardens so I admit I got the opportunity to really see some of the images usually prompted by movies only up to now. Having recently seen Un Prophète,

was up to then my only insight on prison culture !

I had to cross courtyards full of inmates playing ball games or jogging to enter the prefab where my lecture was meant to take place. Too bad I didn’t get to see the inside of the dilapidated former luxury Palace Hotel but that might be for next time !

You alas won’t see any photos from the inside of the prison, of course, but the class I was taken too really looked like a normal conference room. There were about 30 inmates, of all ages, colours and walks of life from what I could tell.

After some words of introduction by Renford, it was then my turn to talk to these prisoners, all dressed in blue uniform, with a “PRISONER” tag written in large yellow capital letters on their right leg.

I delivered my talk in the allocated hour and was myself surprised at how pleasant it was, to convey to the inmates my experience, images and comparisons between the US and European Multiculturalism. I really did my best to take these men out of their walls and despite whatever reasons they had for being where they were, I found them profoundly touching in the way they litterally were suspended to my story and when they made a queue to shake hands and tell me how much they had appreciated my lecture.

Although I doubt it will have the same effect on you, dear Reader, here’s the ppt I presented. I wasn’t able to pay it so simply read my slides and passed them to the inmates as I kept reading the next ones.

I might be immodest in doing so, but here’s the message Renford sent me

You were phenomenal today. Those inmates were hanging on your every word.
You connected with them…great job!

which I have to say will make me boast for a while, not because of what I did but because I had the feeling I had achieved what Renford’s Association, the Prison Education Project (PEP) had in mind and of which I am told I am now part and parcel.

My amazement at the much anticipated Q&A session was the quality and sensibility of the questions the inmates eagerly asked me, showing not only they had paid extreme attention to what I was saying but that it definitely rang a bell in their identity and memory. Most questions were directly related either to authors I wasn’t familiar with but working on multicultural structures pretty much on the same line as my Israeli colleague Larissa Aronin, some were related to the issue I raised that you do not express yourself nor structure your thought the same way according to the language you speak. This gave rise to a series of remarks approving and proving my point, for which I was really grateful.

I would also like to pay tribute to the staff of the prison I got to meet. I was lucky to have them also in the audience and we connected in a very simple yet authentic way. These wardens also enjoy being taken out of the prison. One of them is a former teacher, this helped connecting, another one is a war hero who was able to track my strange english-american speech and dissect it, another one yet is of Swiss origins, and the only other woman who was there was a remarkable lady. I won’t forget any of them, especially not the bilingual Spanish-American warden who eagerly came to get my business card and invited me next year to celebrate Bastille Day in….Santa Barbara!!! America is a perpetual surprise and definitely a place where I feel at home in a very authentic and friendly manner.

for a real feast  (Biscuits, Fried Okra, Fried Green Tomatoes, Straw Onion Rings,
Fried Dill Pickles, Spring Rolls, BBQ Tri Tips, Chicken Strips,
and Quesadillas with BBQ beef inside, photo taken by R.Reese) and then a tour of Clairemont and Pomona which I gladly share with you. California State Polytechnic University is especially incredible as it was founded with a donation of the Kellogg foundation (thus the image of cereals you will be surprised to discover in the ppt) and is totally self sustainable with its immense solar panels, ranch including all varieties of fruit and vegetables as well as pigs, sheep, hens and porcs and of course their world famous Arabian horses.

Well now my dear, it’s time to have a little swim in the Californian delights

before heading to the IDDAY celebration as I also get to talk about multiculturalism and the arts today…but to a much different audience I might have more difficulty captivating….