Some people go to Fiji for its white sandy beaches, crystal clear sea, 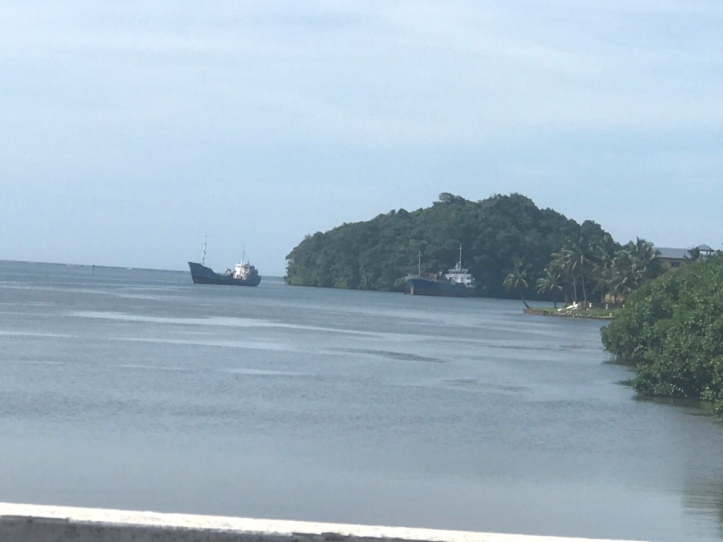 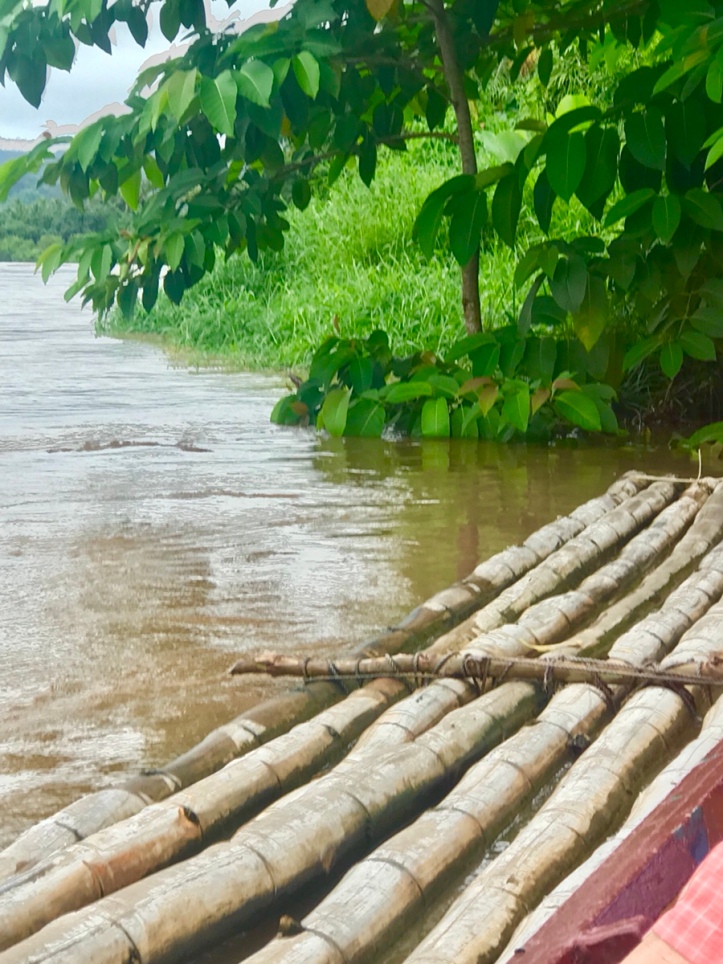 …Had I had more time, I would no doubt have gone to all those wonderful places and did my fair share in my 5 days on Paradise Islands. However, Fiji was merely a little halt in my quest for Māori and Southern Pacific peoples and culture…

The musical welcome upon our arrival to Nandi certainly made us feel right away in a laidback Southern Pacific mood, so instead of renting a car, I followed my massive Fijian neighbor in the plane and my friend Branka’s advice and took the bus to reach Suva, the nation’s capital… some 5 hours and many villages later! 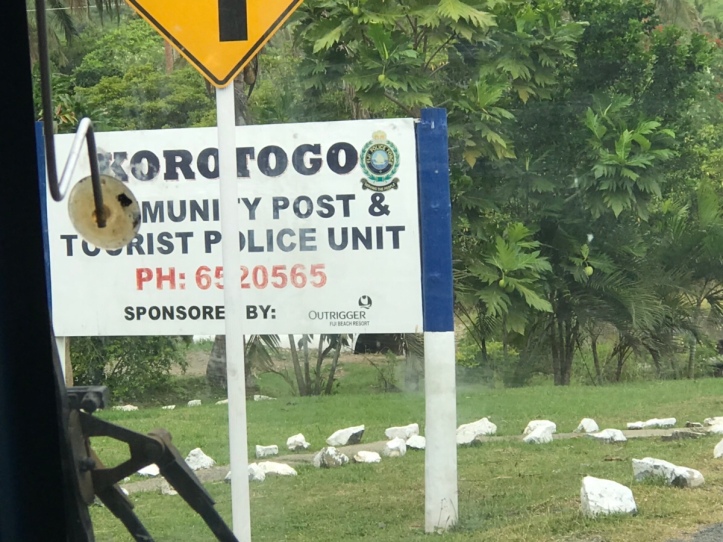 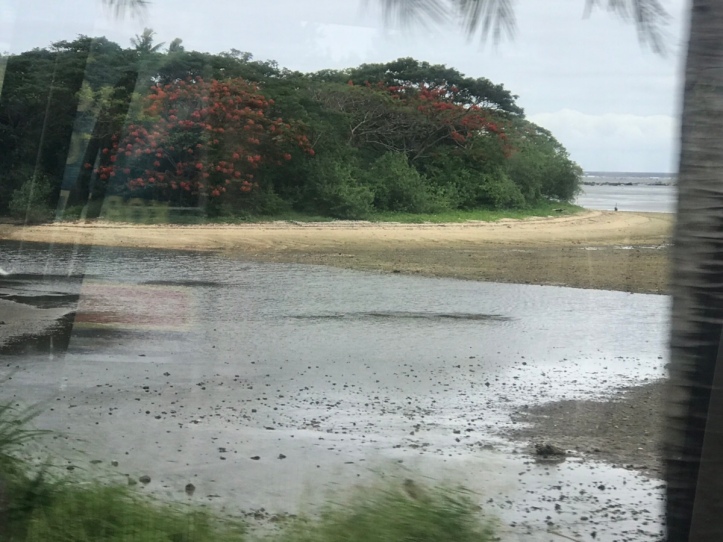 It’s enabled me to enjoy the local transportation, the villages we crossed 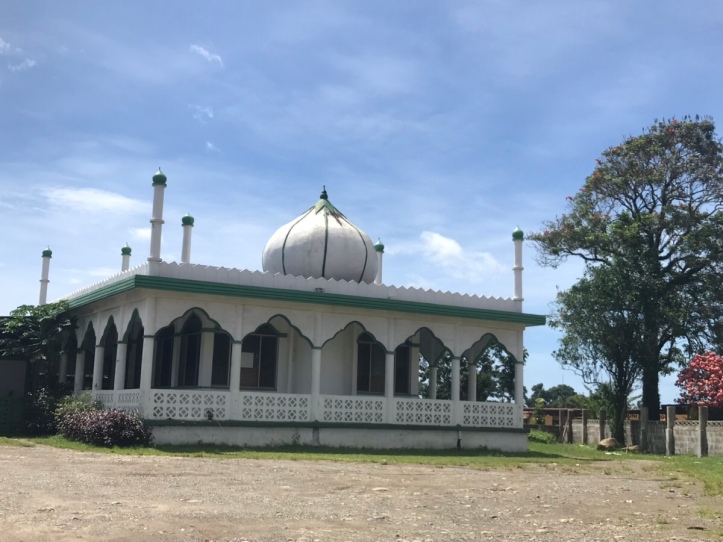 and the state of populations this part of the world.

Everywhere, people smiled and spoke to me! I did not feel insecure the way we sometimes experience in big impersonal cities. However people kept telling me to be careful and took great care of making sure I wasn’t in danger…

I have wandered through the whole city and even managed to make my way through the governments premises unnoticed by an absent police to such an extent I had to knock at an office door in order to be able to visit the parliament hall.

Eventually a charming lady showed up and organize instantly a private tour of the seat of the present democratic Parliament.

I tend not to read too much about the destinations I’m visiting and reserve the reading for after my visit. In this particular case I definitely should’ve done more of an effort to know more about Fiji‘s history as its situation is rather volatile!

Just as I arrived, the news dealt with the desacration of a Temple (https://fijisun.com.fj/tag/temple-desecration/) and despite everyone asserting that ethnic 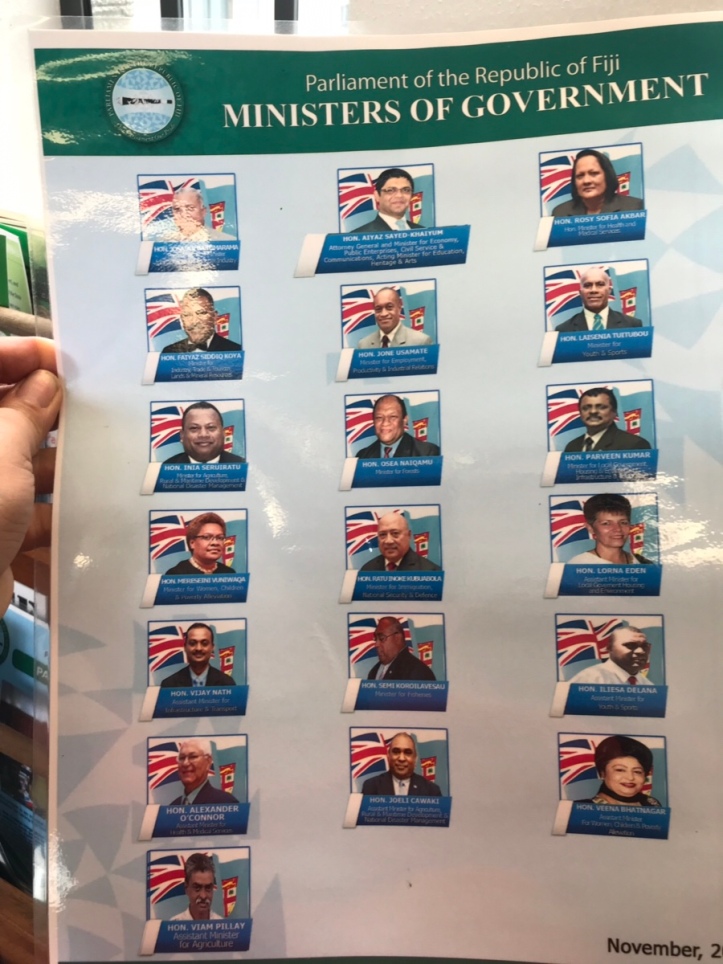 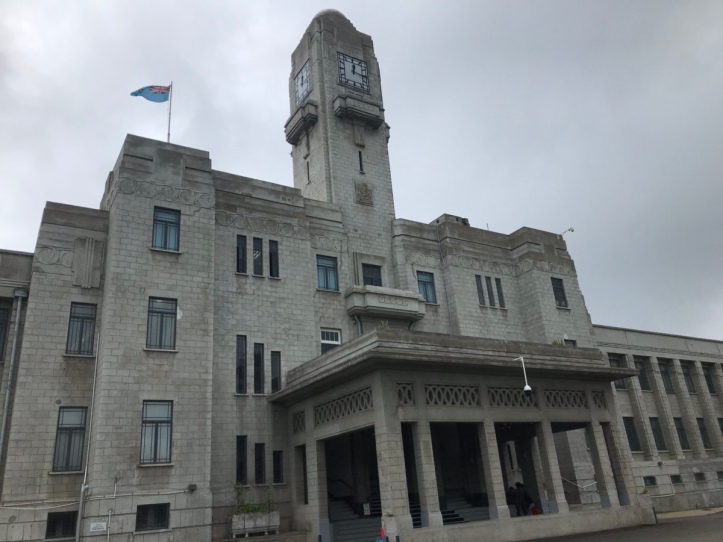 tensions don’t exist, the fact that the whole population speaks the 3 official languages,

two of which cannot be used in Parliament debates is, to my experience a rather good recipe for volcanic coups which are the lot of much of Fiji history. So I fail to see how this can run in the long term yet since all Fijians go to the same schools … where and if they can afford it:

« The Fiji Education System is administered by the government, but most of the schools are managed either by the local committee or by a single racial community. The Ministry of Education in Fiji is striving to subsidize the educational fees to make it affordable for everyone. The burden of school fees, often associated with the cost of transport in rural areas, can be prohibitive for some students.

Primary education in Fiji is not compulsory, but free from age 6 to 16. Students may be admitted to the secondary schools by appearing in competitive exams. Students admitted to high school may continue for a total of 5 years. Students either leave after 3 years with a Fiji school leaving certificate, or remain on to complete their final 2 years and qualify for tertiary education. » (http://www.expat-quotes.com/guides/fiji/education/)

So theoretically, Fijians are exposed to each other’s culture (unless they choose the private schools system or live in a monocultural village!).

There’s room for hope however since 2014 saw the first supposedly open proportional representation, meaning the end of communal voting and given the recent increase of the population in a demographically related Parliament, two more seats are about to be added to the mono cameral parliament (senate was abolished a long while back!). The majority is detained by

Opposition Sodelpa is perceived as very anti-Indian however

Sodelpa is a multiracial party but I think you spoke to a taxi driver that told you that we are a perceived racist anti Indian party.

Like I told you, we have Indians members and even a Vice President is of Indian heritage of our political party, which this year has been tagged as the peoples party. (Waka Viliame)

he National Federation Party which holds 2 seats. I met their political strategist on my way to Tonga, Waka and his Tongan wife Tupou:

So we don’t mind being called extremists as we are nationalists for lack of a better way to protect our indigenous values and hierarchical traditional way of life. As for the individual vote it is disguised under party constituencies,

Debates at the Parliament are conducted in English only with Sign language interpretation but “no Fijian dialect!” (By the way, Native Fijians call their language Kaci whereas their Government refers to it as Itaukei, aka the Indigenous Languages) according to my guide who mentioned the two recent coups, the 2000 civil coup after which a significant proportion of the Indian (by the way they hate to be called so, they are descendants of slaves as much as the African-Americans, meaning Fiji is home!) and 2006 military one.

A pluriethnic state where hindou Indians post a red flag in front of their house (out of purely religious purposes!)a native language the name of which is still debated

and …sulfurous stories of cannibalism to spice up the atmosphere, related or not to the Bounty Mutiny 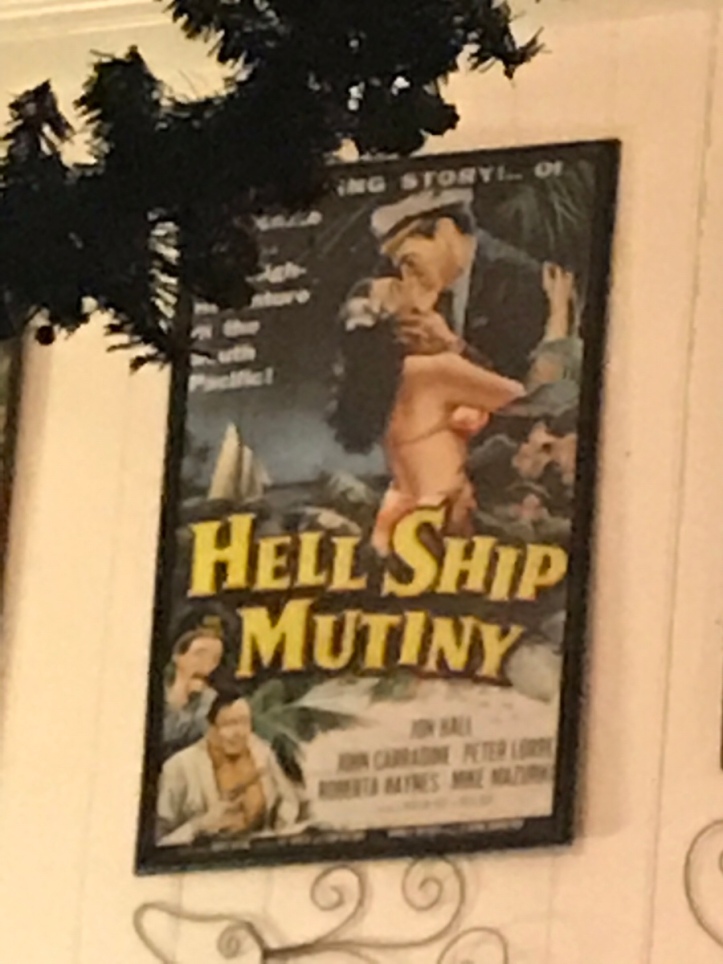 Read this account from a Fijian full of knowledge and humour and the comments related to it eaders.

Ruci, a charming farmerwith Sarah her colleague from the same village explained the names and virtues of all her products 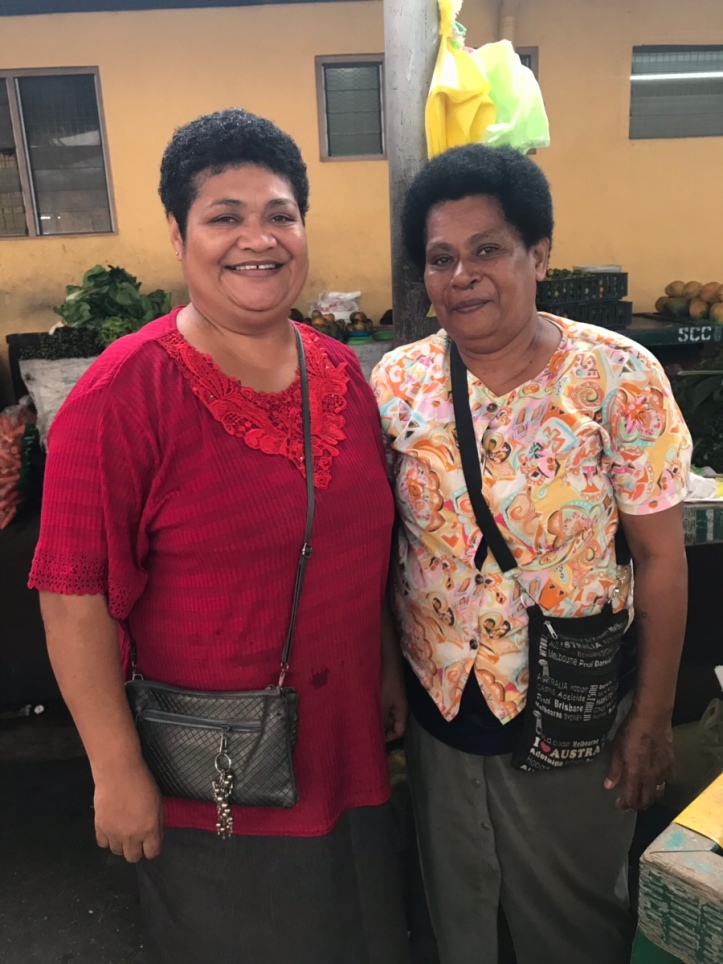 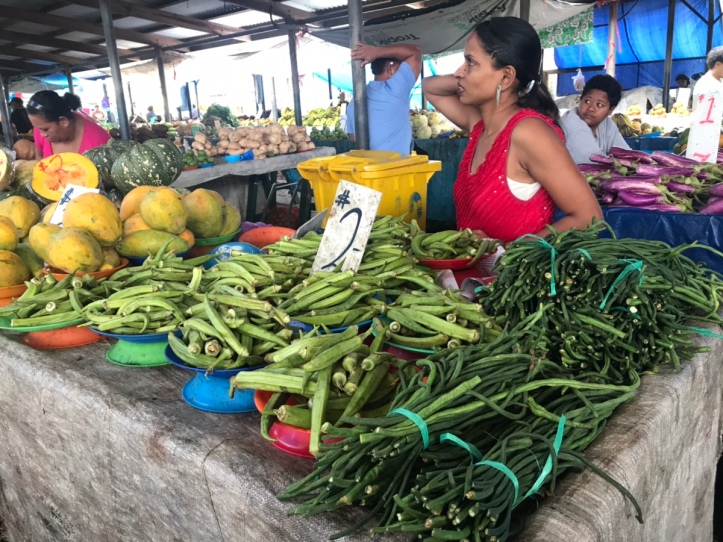 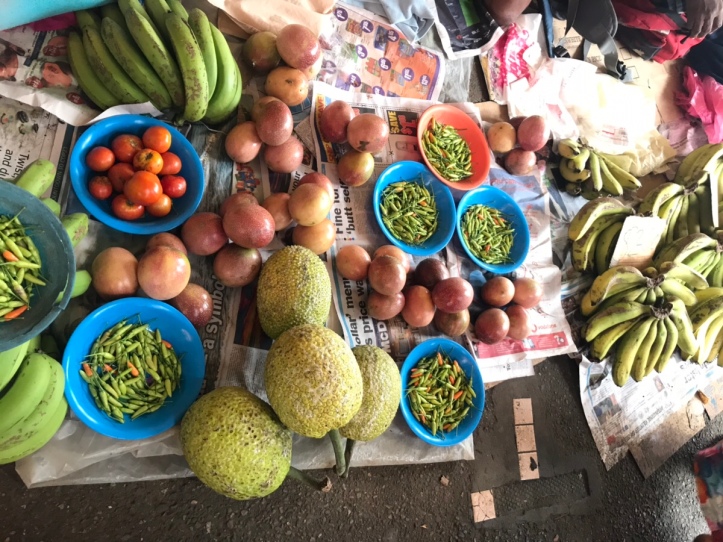 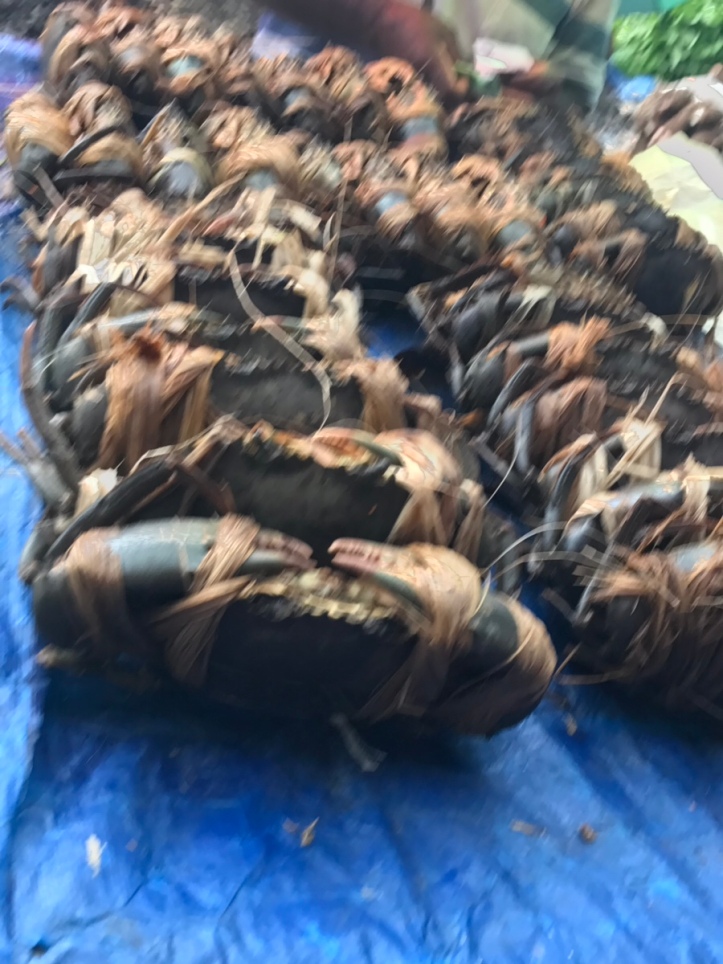 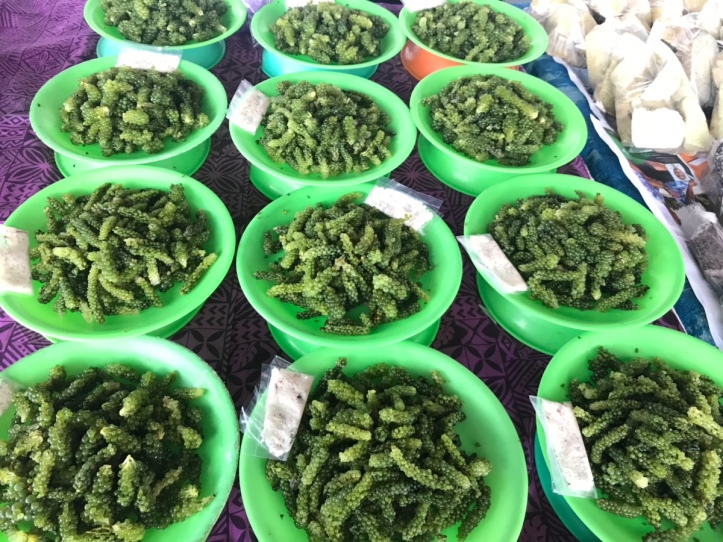 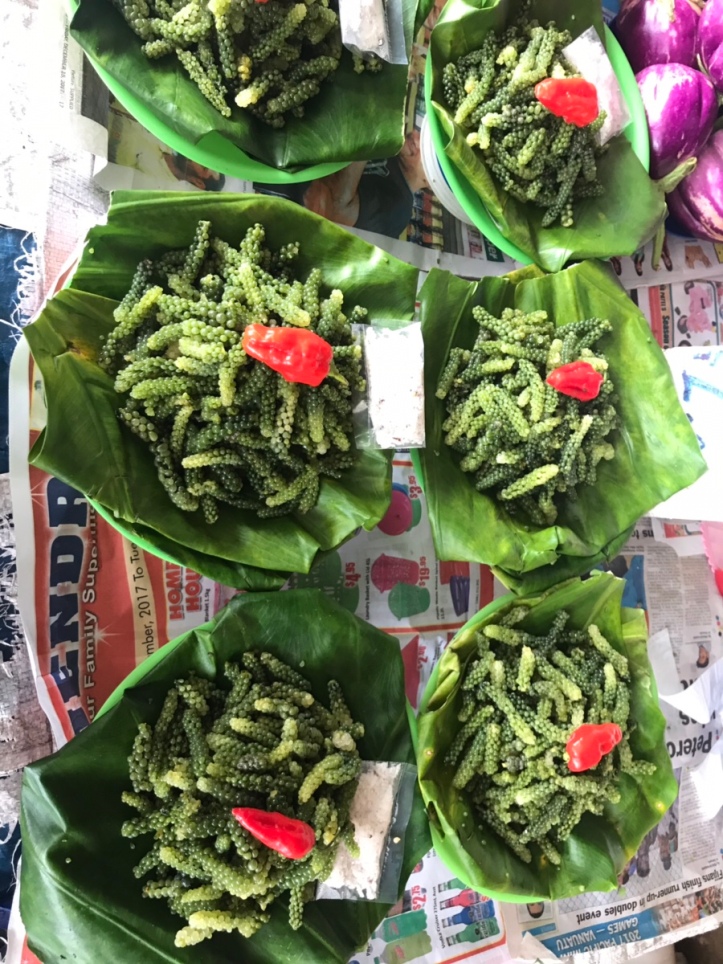 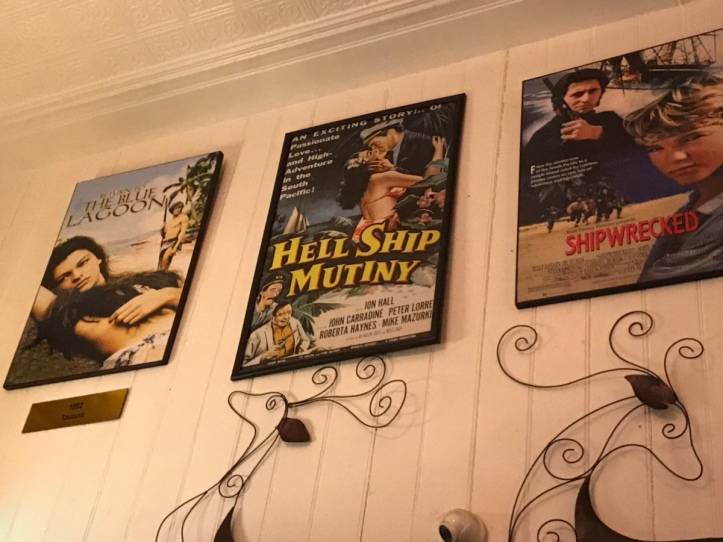 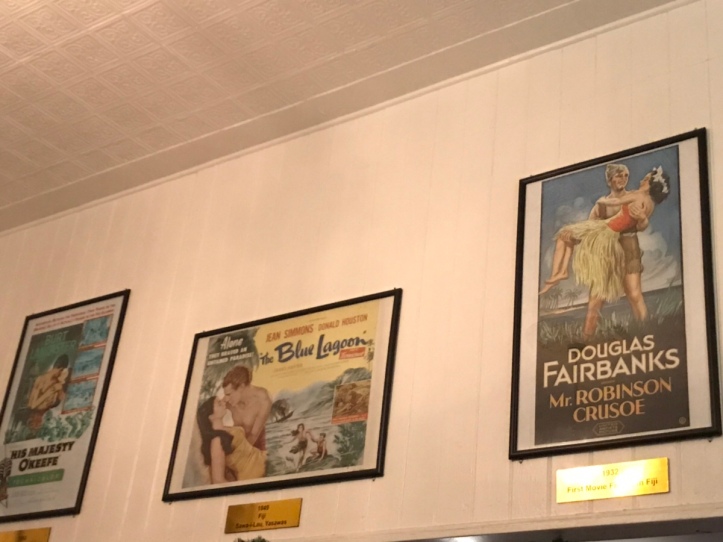 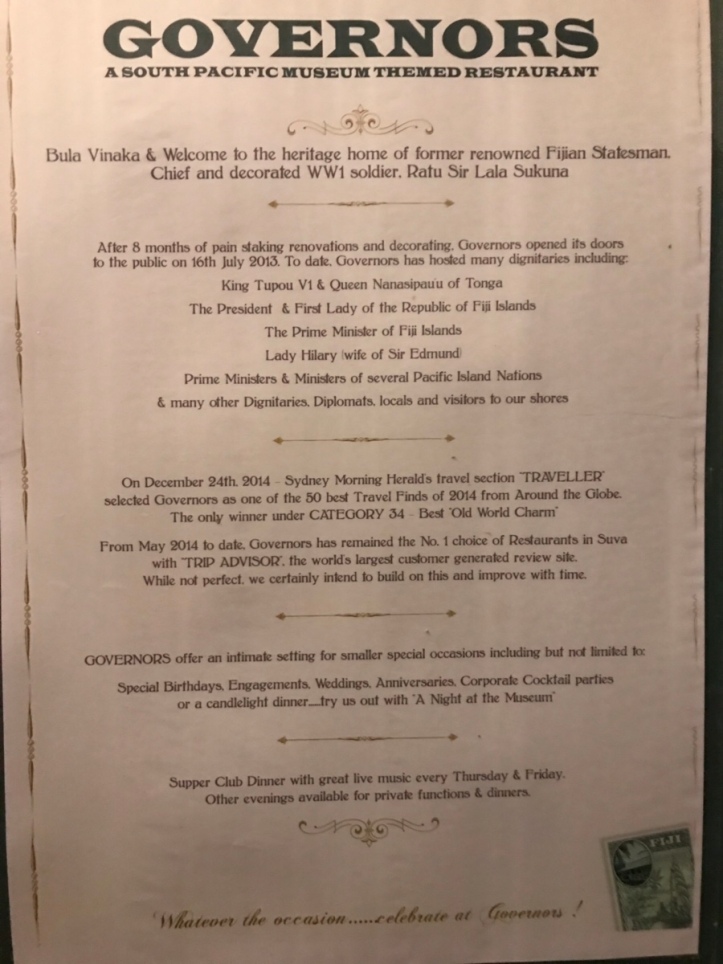 (that’s the fish caught in the video above), the use of the Sasa as a broom…

Then the Fiji black magic happened. A taxi driver, Sam offered me a ride which I politely declined as I had reached my destination…

According to his absolutely brilliant scam, the taximan license plateLT5418

just had a son who n this very day we met from an ailing wife after 9 years of “prayers”… While I realized it was most probably a scam, I took the chance of his offer to visit a “real village with real people” on Sunday, making sure to have no money apart from 20 Fijian dollars just in case. He showed me a few places and introduced me to “villagers” who probably had no idea about the scam and offered me a lovely tea as well as a coconut from their tree 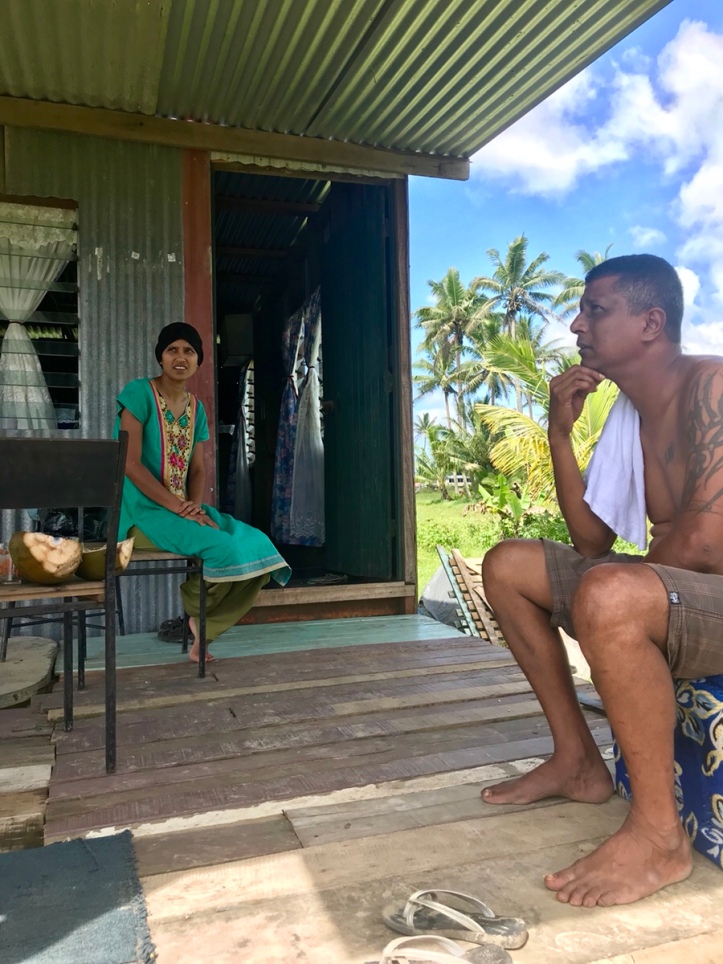 Then I declined a Kava ceremony offer on the pretext I already enjoyed one on the previous day and asked to simply go to a beach.

Where I enjoyed a lovely swim while he dutifully looked after my belongings!

I should add that upon picking me up at the airport he told me his wife had only a few days left and I volunteered to give him the excursion money, happy to go home without further a due… and he was adamant he was used to “sweating to earn his money”.

Then after the beach on our way back and after I declined visiting Pacific Harbour any longer, while we were driving he asked to make a call to the “hospital” with my prepaid card phone, went out to make his call, coming back to announce me in tears that his wife had passed away. He put up a show well worth the 20 bucks I had prepared for the occasion and can confirm that when I came back I double checked that indeed the number was his wife’s (very much alive!)….

Raiwonga village near Navua (name of river too) 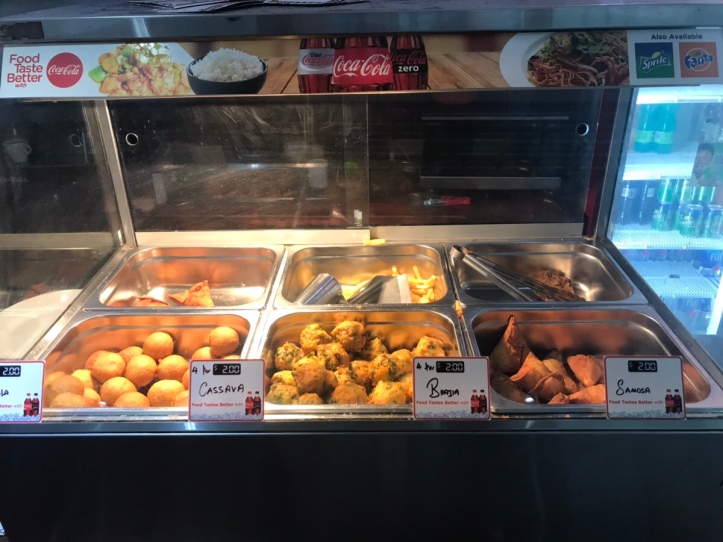 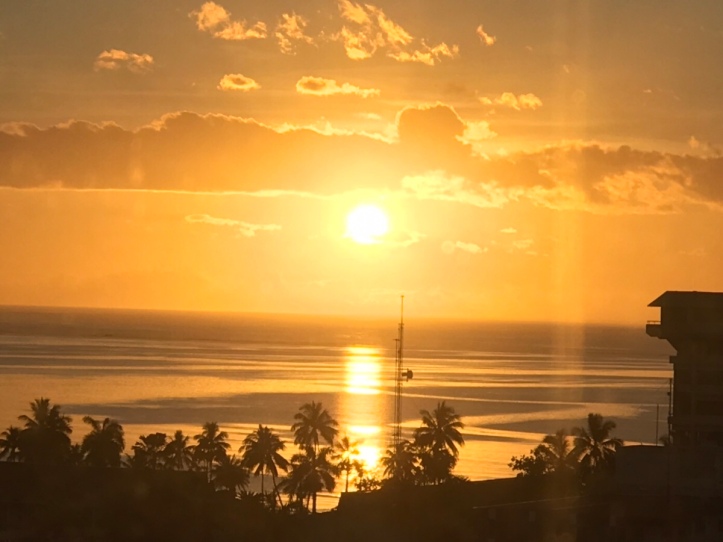 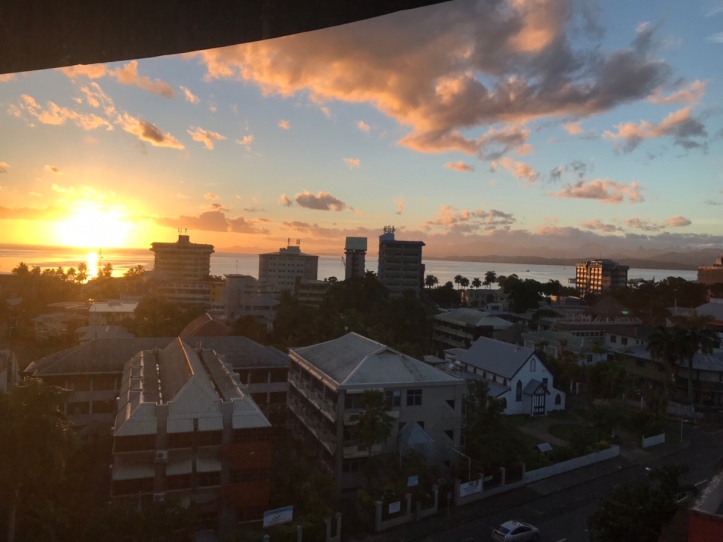 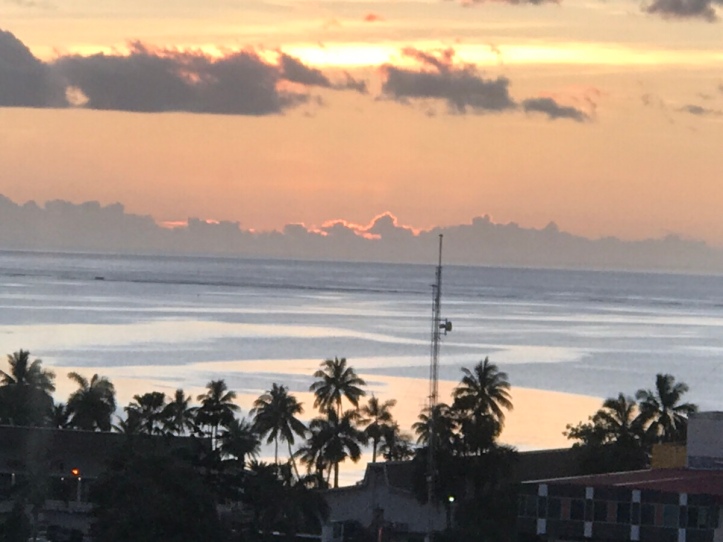