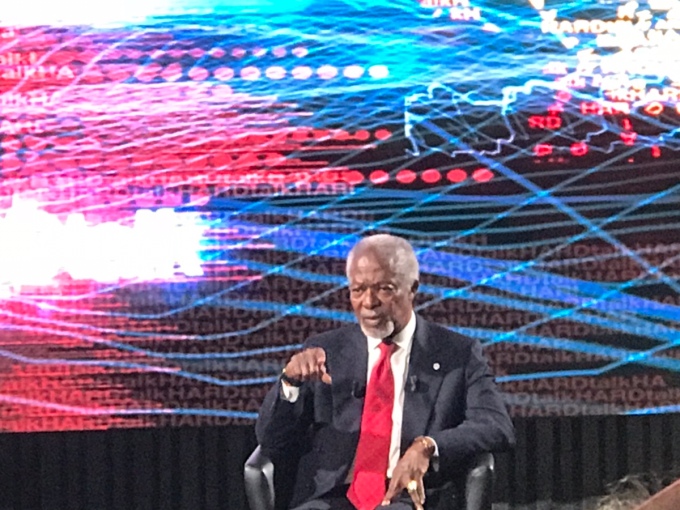 I was a little bit torn apart as, at the same time, was about to begin the Shoah commemorative celebrations at the Bâtiment des Forces Motrices.

However I couldn’t help wanting to revisit a part of my past I am proud of but do not miss at all,

Seeing again this self-congratulating auto satisfied crowd of aging diplomats comforted me in my decision made with Kofi A. Annan’s approval to return to the basics i.e. education.

This doesn’t diminish in anyway my immense admiration for the man and his achievements. I feel privileged to have collaborated with such an outstanding individual for a couple of years to the extent that I considered that after him no mandate was going to be exciting enough…. yet it made me aware that what was mostly needed was to educate the youth, not to contribute to a fading international system which no longer corresponds to our society and needs!

Had I had the chance to ask him a question, it would have been about education and maybe also about whether Barack Obama ever deserved his Nobel prize…. however questions from the floor where reserved to the old diplomats and I was quite impressed with their sharp question is especially that of Martti Ahtisaari, former president of Finland and also to the Graduate Institute students who impressed me a little bit less although one question from a young Iranian woman was quite timely… unfortunately the answer was a little bit too diplomatic!

This being said, here are my notes: 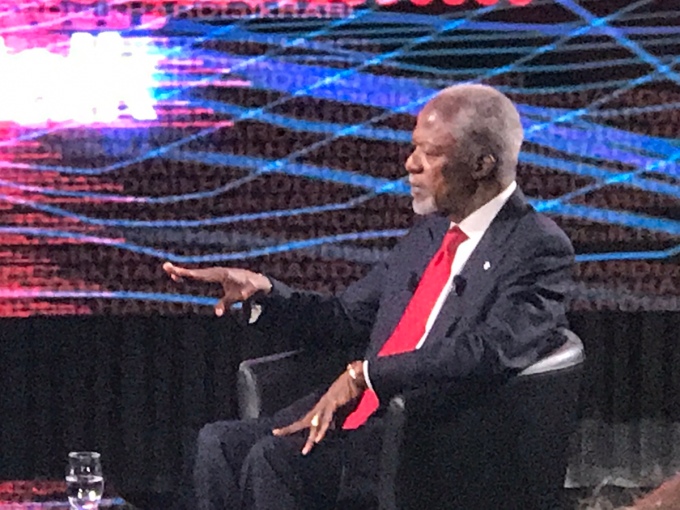 Zeinab Badawi will ask KAA about biggest fears and regrets

About Trump: different leaders have visions of leadership…I don’t agree with threats in Syria; We need cool heads and sober judgement. Politicians sometimes talk themselves into war.

Trump has a special language for diplomacy

Situations like Congo show the limits of Int’l pressure. We should strengthen local organizations

⁃ And then the UN under the UN SG

Rwanda was the lowest point of my career

What is it in our Africa that causes us to kill each other?

ZB: Never again and yet one year later Bosnia

Is the UN still fit to our world…. (answers the usual blabla…. about it being better than nothing. My own comment)

Again my comments I introduced Benjamin Barber to Kofi A. Annan and was really glad to hear him say that

About Aung San Suu Qyi, he admitted that “we made her a saint and she became a politician…”

They were also some really funny anecdotes about his likeness to Morgan Freeman thanks to Mrs Annan and we even sang happy birthday to this gentleman if there was ever one.

I then dashed off to the BFM for a much sadder yet very well organized and moving celebration in the presence of Claude Bloch, one of the very few deportees still alive who made a poignant rendition of his ordeal at the age of 15. He mentioned how his mother gave him life three times; during his birth, when she ordered him to wear trousers instead of shorts when they were caught by the Gestapo and when she sent him away from her when they entered the death camps.

Several speeches were made, all of them excellent, all of them reminding us that we would have to be the second generation witnesses as we heard the deportees’ words and recalling the recent antisemite murder of Mrs Knoll three weeks ago…

But I will tell you what shocked me the most. I attended two events, both had a certain level of security, however the security for the Jewish event was extremely thorough: I had to not only show my ID in both instances, but got my bag fully searched went through a security checkpoint and at the end of the event we were all told either to remain inside the building to catch up with each other or to quickly walk away from the building when leaving. I cannot tell you the way I felt in 2018 to have to go through such unfortunately necessary enforcement measures… I guess that’s where people of goodwill such as Kofi A. Annan obviously failed.

I am devastated that my last boss and one of our world sharpest diplomats passed away…and as I posted that I found it hard to believe, my friend and first boss in Switzerland Jean Freymond, President of Dialogues Geneva, posted the following reply:

Our heritage and responsibilities

What is truly extraordinary when a man of such exceptional humanity and wisdom passes away is that it leaves us stunned and challenged. We become altogether orphans and heirs. Heirs of an attitude, heirs of a wealth of common sense and unrivalled intelligence of the heart. Yet, more importantly, we are transformed into the keepers of an immense responsibility.

Kofi Annan was a man of ingrained optimism. Yet, hasn’t he ever doubted? Hasn’t he ever shared with his close circle his desperation when facing the tragedies he had to witness, or when challenged with the endless immensity of his Sisyphean task? In an interview given in public for the BBC in Geneva in April 2018, he reaffirmed his optimism. However, he didn’t hide his concern for the fact we were in a «particularly messy world today without emerging leadership». Wasn’t it at this very moment that he handed over to us the responsibility, that he told us: «it’s now your turn to continue this combat »? But how should we do that?

The world community and, within it, many communities it encompasses are, under our eyes and cameras, divided into hostile camps and dissolving. Passion and self-centered blind interests are its dominating engines. Trust and confidence are fast vanishing. Dialogue has been replaced by invective. Conversation is substituted by a gigantic media battle. War, the real one, the cause of millions of victims, which we vowed « never again» to tolerate, has become a real possibility as rearmament is the most tangible evidence.

Kofi Annan had peace and consensus as his focal point. We should create the conditions of their reemergence by reinstalling, at all levels and as an absolute priority, the trust without which there can be no dialogue nor cooperation. This should be pursued through a series of tangible and accountable measures. The confidence building measures (CBM) process of the Conference on Security and Cooperation in Europe (CSCE) suggests a methodology. What’s keeping us from using it as a source of inspiration at the global, regional and national levels? The idea of a digital Geneva Convention could also be implemented. Distrust, hatred, but above all mean interests of inflated egos and greedy warlords have, more often than not, overridden our common sense, none the least in Mr. Annan’s continent of origin, his constant concern. We should break out of such vicious circle.

Yet this is only a first step. Kofi Annan shared with Amartya Kumar Sen and Muhammad Yunus the strong desire to eradicate poverty. Indeed, precariousness has never been more general. It causes despair and rebellion. It feeds these «springs» which are as many screams of helplessness. It contributes to protectionism and identity conflicts, to populism, fundamentalisms, terror and forced migrations. It is the source of instability and insecurity in societies. It contributes to an infringement on our liberties, human rights and ultimately on democracy.

Combatting precariousness requires a large-scale effort of socio-economic development, sustainable and inclusive. The Sustainable Development Goals (SDGs) suggest a wide range of objectives. They however lack a sense of priorities thus of urgency.

To reduce precariousness demands to immediately focus on a vital purpose, economic development, unique provider of decent occupations generating incomes enabling tangible social progress for all. Creating masses of employments means restoring hope and suppress for millions of human beings the fear for the future they presently nurture.

Such a development has to rest on the twin major pillars of entrepreneurship and construction of infrastructures, especially the existencial ones, namely access to water and energy. It requires an unusual collective effort and to get off the beaten track. Governments should provide the needed framework conditions. The next step, at least a major one, should be to implement public-private partnerships of an unusual number and size and gathering professional actors both at a national and international levels. Such partnerships should include public and private funders able to jointly invest tens of billions of dollars in innovative financial schemes with the guarantee of a return on investment and risks control. Funds ready to be invested are far from lacking. They can be counted in hundreds of billions.

To secure this investment, a profitable market is required to absorb the goods and services provided by entrepreneurs and infrastructures. Without such market, the cost of the production factors are not to be covered, including workers’ wages and the required return on invested capital. If it intends to reduce precariousness, humanity cannot escape the imperative to think in economic terms.

Huge challenges are facing us demanding unusual responses! Many will too easily dismiss them as utopic. What would be utopic would be precisely to avoid facing a task which will require audacity, imagination and acknowledging the change of paradigms which has already occurred, whether we like it or not. Consequences will be dramatic otherwise.

Kofi Annan was aware of the poor state of democracy too often a mere appearance of what it should be. Improving the functioning of democracy is our third task ahead. We are to give back democracy and the values it encompasses, a sense and to make it credible again for tens of millions of disillusioned citizens. Democracy has to deliver. This implies concrete steps rooted in transparency and accountability. An informed, educated and empowered citizen is more than ever necessary. Citizens should be given a central role in order to prevent any manipulation and corruption of this fundamental governance tool called democracy.

Kofi Annan would never have been satisfied with mere eulogies. He left us a reference system and ultimately a mission. We now have an obligation of fulfill it concretely, with the determination, simplicity and humility he also bequeathed us. As for his ultimate elegance, I’m afraid it’s a luxury that belongs to another century… 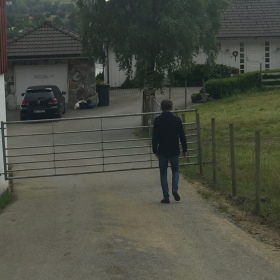 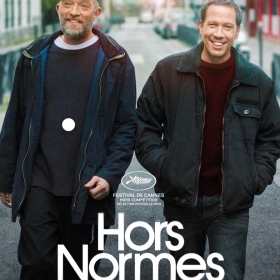 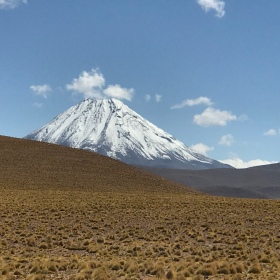